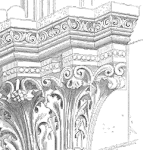 The Exponential distribution is popular and useful in isolated situations. It has some nice features and flexibility that support it’s popularity. This short article focuses on 7 formulas of the Exponential Distribution.

When t ≥ 0 then the probability density function formula is:

The m(x) function provides a means to estimate the chance of survival for a duration beyond some known time, t, over which the item(s) have already survived. What is the probability of surviving time x given the item has already survived over time t?

Note the exponential distribution is memoryless, meaning the probability of failure over any given duration is not affected by how long the item has been in use. Since the hazard rate is constant for any duration, the chance of failure the first hours is the same as the 100th or 1,000th hour.

That is pretty simple, which makes the integration for the the cumulative hazard rate simple as well.

This is the cumulative failure rate from time zero till time t, or the area under the curve described by the hazard rate, h(x).