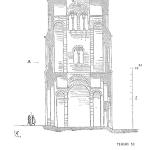 An explosion occurred at East Ohio Company’s peak-shaving plant in Cleveland, Ohio on October 20, 1944. 128 people were killed and 225 injured as a result of the incident.

East Ohio Company built a LNG peak-shaving facility in Cleveland in 1941 to augment the gas supply. In 1943, a cylindrical storage tank was added to increase the LNG storage capacity. On October 20, 1944 this cylindrical LNG storage tank failed releasing 1.1 million gallons of LNG. The liquid overflowed the partial dike designed to contain piping spills and ignited.  Many of the fatalities were in an adjacent utility company building on the same site.  Liquid also flowed into city sewers and caused local explosions in a number of locations some distance from the site.  It is estimated that the damage from the pool fire itself extended about 0.5 miles around the failed tank.  A second spherical tank failed after 20 minutes of fire exposure increasing the duration of the accident.

Stainless steel was scarce during World War II and so the cylindrical tank was made up from another alloy – 3.5 % nickel steel. The tank was placed in service and eventually failed catastrophically upon contact with cryogenic LNG. The 3.5 % nickel steel is no longer used for cryogenic applications. Instead 9% nickel steel, which does not embrittle at low temperatures, is used. Further, it was evident that LNG storage tanks needed to be provided with full capacity diking and that tanks should be spaced to prevent failure from exposure to nearby fire.

« What Does it Mean to be ‘Safe’?
The Most Commonly Underused CMMS Features »