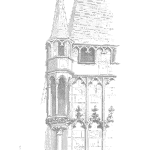 The location parameter, θ, which is greater than zero also sets the lower limit of time, t. It may be referred to as t-minimum.

When θ ≤ t < ∞ then the probability density function formula is:

The m(x) function provides a means to estimate the chance of survival for a duration beyond some known time, t, over which the item(s) have already survived. What the probability of surviving time x given the item has already survived over time t?

This is the cumulative failure rate from time zero till time t, or the area under the curve described by the hazard rate, h(x).

« Having to Compromise Nothing
Ensuring Linkage Between Requirements and Verification »