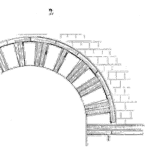 Vertical tank agitator bearings are required to take both radial and thrust loads.

To protect the gearbox it is common practice to install intermediate bearings on the shaft. If these bearings are exposed to the process vapors then special care is needed to protect them from contamination and ensure adequate lubrication.

Here is a modification to an 80mm agitator shaft thrust bearing that went wrong.

An agitator gearbox was being replaced because of bearing failure. It was decided to convert the thrust bearing taking the weight of the shaft and blades from a bronze plain bearing rubbing face to a thrust ball bearing.

The intention was to decrease the torque and forces on the gearbox.

The original design is shown in Figure 1 and the new design in Figure 2. The bearing sat in a bracket bolted under the top of the tank and the shaft was coupled to the gearbox.

The new arrangement lasted only 8 months before the thrust ball bearing collapsed. On investigation, it was found that the bearing had not received enough grease and what grease there was had been contaminated.

A close inspection of the bearing arrangement and the environment in which it had to operate highlighted:

It was clear the old design was the more satisfactory for the situation.

To overcome the drawbacks with the new design an additional grease port was added to inject grease into the thrust roller bearing.

A shaft seal should also have been fitted to keep out contamination, but time was limited and it was left to the grease to build-up on top of the thrust bearing and act to seal it off. This was a very unsatisfactory outcome.

The best option would have been to return to the original plain bearing design, as it was inherently simpler and more suited to the environment.