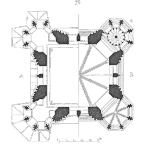 A common assumption when comparing three or more normal population means is they have similar (the same) population variances.

ANOVA and some DOE analysis results rely on the underlying data having similar variances. If this assumption is not true, the conclusions suggested by the ANOVA or DOE may be misleading.

It doesn’t take long to check.

Test for homogeneity of variance

M. S. Bartlett in 1937 published the paper Properties of Sufficiency and Statistical Tests.

The process to check if samples drawn from possibly different populations have equal variances later became known as Bartlett’s Test.

This is particularly useful when comparing population means and making the assumption the related variances are equal.

Bartlett’s Test is accomplished using the structure of a hypothesis test. Setting up the null and alternative hypothesis, calculating test statistic and comparing to a critical value to make a conclusion.

Note: Bartlett’s test is not robust from departures from normality, thus test for normality first. A robust test for homogeneity of variance to consider is the nonparametric Levene’s Test.

The null hypothesis is all the population variances (k populations being compared) are equal.

A box plot may help identify the offending sample variance.

For each population, draw a sample of size ni from the i-th population where i = 1, 2, … , k. Calculate the sample variance from each sample.

The combined sample variance is

Finally, we can calculate the test statistic, M, which Bartlett determined as

Bartlett showed that M is approximately distributed as χ2k-1. This approximation is suitable when each sample, ni, has at least 5.

The critical value is

With 1-α confidence and k-1 degrees of freedom.

If M/C greater than the critical value reject the null hypotheses at the alpha significance level and conclude at least one population variance is different from the others.

If M/C is less than or equal to the critical value, conclude there is insufficient evidence to reject the null hypotheses.

This doesn’t mean the variance is actually equal, we just do not enough data to prove that at least one is different.

« Plot Your Derating Guidelines
Chain drives – some experiences in the field »