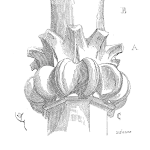 When you have a scattering of ideas or suggestions, you can use affinity diagrams to organize and group them.

Affinity diagraming is a simple way for an individual or (better) a group to quickly gather and organize a large number of disparate concepts, ideas, suggestions, etc. It is a natural activity after a brainstorming session.

With one two steps, this procedure is easy to remember.

First, without talking (more on this in a moment), sort the ideas into groups.

Second, for each group of ideas create a summary title the represents that group.

The first step includes the no talking rule. When just finishing a brainstorming session where the team is quickly generating ideas and withholding comments, this next step becomes very difficult for most teams.

The idea with no talking is to further reduce the urge to comment, lobby, cajole, or critique ideas toward being the one taking forward in the analysis.

The power of affinity diagraming with a group is getting the groups consensus around the major groups of ideas that require further action and consideration.

Not talking is difficult and requires a facilitator to remind the team to remain silent.

As the grouping occurs, individuals, using their own scheme of grouping and building on other apparent schemes, moves stickies to clusters. Create some space around different groups.

This process may take 5 to 10 minutes. As the movement slows down, that is the signal that the groupings are good enough.

The grouping automatically clusters of similar or repeated ideas generated during the brainstorming. It also bundles ideas that are similar.

For example, if brainstorming how a sensor system might fail, the team may suggest:

This short list could be grouped a number of ways, yet let’s say the team created two groups one that includes the internal to the electronics (solder joints and components) and another that is due to external stresses (damage, corrosion, temperature). You might label these two groups as Failures in circuit board design and assembly and the second group as Failures due to external stresses.

The idea is to summarize the items grouped together. This effectively reduces the number of topics carried forward in your analysis. Instead of dealing with 200 ideas you most likely narrow the list down to 10 or so groups of ideas for further analysis.

Just a couple of notes when conducting an affinity diagraming session:

Just try it next time you have a bunch of ideas to organize. It’s fun, quick, and efficient.

Just two steps. Organize ideas in to groups and add a group label. The hard part is not talking during sorting, yet it does provide the best results.