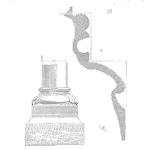 A contingency table, as in the chi-squared test of independence, reveals if two sets of data or groups are independent or not. It does not reveal the strength of the dependence. The contingency coefficient is a non-parametric measure of the association for cross-classification data.

See the article on the  $- \chi^2 -$ test of independence for information on the contingency table and calculations.

If C is zero of very near zero there is no association between the two groups. If the C value is closer to 1 there is a strong negative or positive association.

One of the disadvantages to the coefficient is it generally does not achieve 1 even if there is completely dependent on one another. You can determine the theoretical max C value with r (the number of rows and columns – which must be equal)

Using the value of chi-squared from the test of independence example of 7.5, which has a sample size of 40, we find

Which suggest a modest association between a person’s position and their opinion.