Just a few questions to check your math skills.

1-25. Using Pascal’s triangle allows one to determine which terms of the binomial expansion?

Knowing how to quickly construct Pascal’s triangle allows you to quickly determine the coefficients for a binomial expansion.

The binomial expansion is a mathematical theorem that specifies the expansion (multiplying out…) of any power (a + b)m of a binomial (a + b) as a specific sum of products aibj. For example,

recall that something raised to the 0 power is equal to 1. Also, the coefficients for the resulting three terms are 1, 2, and 1. There are m+1 terms and m+1 corresponding coefficients in the expanded form.

Pascal’s triangle is a triangular array with 1’s at the ends of each row (1 at the apex or first row, too) and of the other values in a row is the sum of the two numbers in the row above. 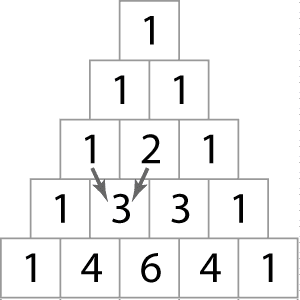 The two arrows point to the first 3 on the forth row, which is the sum of 1 and 2 found on the row above.

1-56. Identify which the following Boolean algebra expressions is correct.

Recall your Boolean truth table for A or B (A + B)