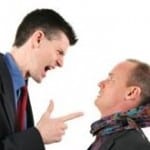 The following article came about from an on-line conversation I had with a follower who responded to an article I had written on the differences between Leaders and Managers.  Her hope was that someday soon someone in a leadership position at her company would recognize the harm her boss was causing and how miserable he had made the lives of those who worked for him.

So as promised here is my take on working for a bully boss!
If you’re lucky you only work for one in your lifetime.

They look to make the lives of those who don’t agree with them miserable and worse yet they have their own boss convinced life could not be any better. The numbers will look good, they might even be better than expected because the Bully knows those who deliver good numbers rarely have to answer any difficult questions. He/she got to this position of authority at the expense of others; tearing people down to build themselves up. If you want to know how the Bully Boss got to the position of authority just ask him/her; most have no issue of letting the world know they worked harder than everyone else, more hours than anyone else, they worked weekends without being asked and sacrificed relationships with family and friends to be successful. They will let you know that it takes a lot of hard work and commitment to get ahead and that he/she understands that most employees will not be able to make the sacrifices and difficult decisions it takes to be a success. Having made this statement the ground work openly bully in the workplace has been set.

How the Bully Operates – Setting the Ground Work

When first hired into an organization the Bully will spent countless hours in the office, they want to be seen as the first in and the last out on a regular basis. He/she may be extremely cordial at first showing up with coffee or treats for the office, openly stating how much they love their new job and how awful it was where they used to work.

He/she is fishing for information knowing sooner or later a few people will begin to talk letting him or her know what really goes on in the office. Who gets along well with the boss, who some of the top performers are and most important who the underperformers might be.

The Bully will pay special attention to the boss, he/she wants to know who the boss likes and while they may at fist appear to want to be friends, the Bully has found his/her real competition.

The first target will be one of the known under performers, someone he/she knows is not well liked. In a meeting or social area the first public jabs will be disguised as a snide comment or joke regarding their performance. If no one defends the target the bully behavior will accelerate, this person will become a regular target and while the public attacks will initially start as jokes, private 1 on 1 attacks will become personal. The Bully will let his/her new boss know how they can’t stand lazy people who are not committed to their work or the team.

How The Bully Operates – Gaining Acceptance

It’s important to understand that in the first few months of their tenure with your company the Bully will appear to try and build relationships with some of their peers doing so only to size up their competition. They know it takes trust to get inside information, what people really think about each other, who really likes the boss and better yet information you might not want the boss or other to know.

He/she will start out being the life of the party and may even poke fun at themselves for a laugh. What they are really looking for is for people to have a few drinks with the hopes that some will openly complain about work or the boss. He/she will file these comments for future discussions with the boss but what they really hope for is for someone to begin openly bragging about their performance. This gives him/her their first chance to publically make a challenge to better the braggers performance. The bragger has walked into a trap the Bully now has a way where he/she can show the boss how committed they are to being not only a great performer but a top performer.

The Bully will now commit every waking hour to outperforming everyone, in front of the boss they will always wear a smile giving frequent updates while around the office he/she is now taking notice of who is with them and who is against them. He/she will quickly label those who are with them as team players and publicly tell those who are natural or against they are not team players. The line in the sand has been drawn, those who he/she perceives to be against them will always be against them, those they believe are for them might stay on the good side for now but they should understand that there are no guarantees they will stay there.

In the meantime the Bully’s boss has no idea that. he/she is now demonstrating full on Bully behavior in the office on a daily basis. In a 1 on 1 setting with the boss the Bully is seen as good humored, ambitious extrovert. They are now giving the boss regular updates on their performance while at the same time expressing what appears to be concern for the underperformers and asking for advice on how he/she might be able to motivate them to do more.

The Bully is Promoted

Those who have been in the working world for several years have all seen it. We also remember the uneasy feeling knowing we would all be working under the microscope and standards of someone who didn’t care who they hurt or ruined to get a promotion.

The Bully will quickly go to work demanding more from everyone while remembering the line in the sand. He/she now has the power to show people out the door and they want quickly make a public statement of what happens when you are not a “Team Player.”

The Bully will have a new boss and a new set of peers and while they again loop back to set the ground work for the next level of your company, those who work directly for the Bully are dealing will full on Bully behavior both in public and private settings. The Bully will have no conscience when it comes to the expectations of those who work for him/her and confrontations will now be public and loud. Private confrontations will be intimidating, finger pointing, threats of demotion/pay cuts or straight up firing are now a regular part of their repertoire. “Remember what I did to Fred? You could be next!”

The Bully holds frequent and regular meetings with his/her “Team” reviewing the individual performance of everyone in front of the entire group and one can expect these meetings to be held before or after normal working hours. He/she is again testing the “Team” to see who is committed to “being successful.” While his/her managers might say that the company cares about your family and having free time to attend to those needs the Bully Boss will let his team clearly know that he/she doesn’t care about your life outside of work and that it had better not ever interfere with your performance.

Dealing With The Bully

I wish I could say that there is a simple formula for dealing with the Bully Boss but there isn’t. The Bullly Boss is very good at wearing two faces, the quick witted, hardworking good guy/girl they show their bosses and mean spirited, vein bulging screamer who is so intimidating that most folks don’t wait to be fired they just move on to get away from the constant assault.

First you have a decision to make, is it worth the risk to take the Bully on or can wait it out or transfer to a different area? While there is nothing at all wrong with waiting it out or moving on the risk of not dealing with the problem is you will second guess your decision for years to come.

To beat the Bully Boss and get the attention of his/her superiors you will need lots of facts, dates, times, who was present when the behaviors occurred and what people have attempted to do to correct the offending behaviors. There is strength in numbers here the more people you can get to stand up and begin recording and verifying the events the better. Be patient and document everything you do and every interaction you have with the Bully. Work with your team to document his/her inappropriate behavior, who was there when it occurred the date and time. Expect that the Bully will be very smart when it comes to leaving a paper or voice trail of evidence and if they suspect they are being observed they tend to hunker down and avoid their usual targets.

Don’t forget today we have a world of simple technology that allows us to record and photograph meetings. If Bullies have a fatal flaw it’s that they can’t always control their outbursts, especially in an environment where they feel comfortable letting it all out.

In the end with a stack of documentation and tight list of supporters as a group you have what you need to take down the Bully. Solid documentation goes a long way when it comes to making tough decisions easy so don’t make demands simply present the information and let the facts speak for themselves!