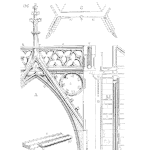 Reaching for a goal may include taking some risks. In reliability testing, we are often limited by the number of samples available for testing. And, in the case where time is available or the acceleration factor is high we can take advantage of testing longer.

works when testing each of the n units for one lifetime. One way to reduce the number of samples needed to show the same confidence and reliability is to run the test longer. The above equation is a reduced form of

where m^β is equal to one. Wasserman’s Reliability Verification, Testing, and Analysis in Engineering Design has more information and the derivation.

m is the number of lifetimes. For example, if we know that 10,000 cycles of the door mechanism (open-close cycles) is one lifetime, then running 20k cycles would set m to 2. And, a quick calculation shows that needed number of samples, n, is cut by half. And, with a little thought you can see there is a diminishing return with longer and longer test runs.

The other issue is related to the success testing criteria that there are no failures. The longer the test runs over the expected lifetime, the higher the chance some other failure mechanism will appear – something the is not very likely at one lifetime, yet maybe very likely at five lifetimes. This would negate the test. It’s a risk.

In general, keep m below 5.

Beta, β, is used when the Weibull life distribution for the expected (dominate) failure mechanism is known. If it’s not known, use β = 1. Beta is often difficult to know, and this ‘Weibayes’ approach is for those rare cases when you have supporting information or data that β is not equal to one.

The entire idea is with fewer samples it will take longer before a failure is expected given a fixed failure life distribution. It’s risky, yet often a practical means to reduce sample size.