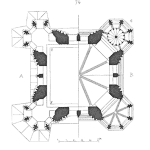 There are four alternatives available to perform alkylation:

If HF is inadvertently released to atmosphere, it poses significant risks to population in the vicinity of facility. Therefore we need to minimize the likelihood of a release and this is achieved by adding an additive to HF to reduce footprint (Alternative 2) or replacing HF by H2SO4 (Alternative 3). H2SO4 introduces risks within the plant but risks to surrounding population are lowered. Alternative 4 eliminates toxic risk by use of a solid acid catalyst.However, solid acid catalyst technology is still not regarded as “commercially proven”. More importantly, whereas Alternative 2 and 3 focus on reducing the risks, Alternative 4 is inherently safer by eliminating the hazard.

Chlorine is often used in water treatment to kill the pathogens. Similar to HF, a release of chlorine poses significant risks to surrounding population. An alternate to chlorine is sodium hypochlorite – chlorine salt which is solid at room temperature. By introducing sodium chlorite we have eliminated the toxic hazards from accidental release.

Clearly an inherently safer approach to risk management provides options which can help reduce risks. This may not always be possible; however, it is intuitive that systematic application of inherent safety principles will lead to less riskier option.It may therefore be worthwhile to integrate inherent safety analysis as a part of your risk analysis.Inherent safety reviews can focus on mitigating various risks:

« Maintenance – Necessary Evil or Value Creator?
When You Should (And Shouldn’t) Use Redundant Equipment To Improve System Reliability »