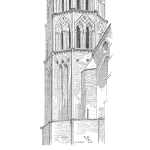 While performing consequence modeling we are often required to evaluate damage to population and property from a fire.

Thermal radiation impact to humans from a fire should be based on the dosage – i.e. the intensity of exposure and the duration of exposure. Furthermore, such an impact from thermal radiation on population should consider the protection offered by clothing/buildings and the ability of a person to find a shelter from radiation.

Usually the surface emissive power for a hydrocarbon flame is 180 – 250 kW/m2 and the radiation intensity drops as the square of the distance.

What critical thermal radiation values should one use in consequence modeling? Following table provides a rough guidance on typical impacts from heat exposure.

Does that mean everyone exposed to 12.5 kW/m2 will die? Hardly! Let us look in detail at the heat injuries.

Thermal radiation hazards can manifest in terms of burns of different degrees:

Street clothing is expected to provide 3 times more time to feel the pain from thermal radiation at 5 kW/m2. An average person is clothed over 80% of the body. Note that if the clothing catches fire, a severe burn injury is expected and 75 kW/m2 is considered a threshold value for spontaneous ignition of clothes. When exposed to a heat source or in case of emergencies, human beings are expected to take an evasive action such as ambulate away from the hazard (reducing the exposure time) or take a shelter (reducing the thermal radiation exposure intensity). An average person can be assumed to be capable of running at 4 miles/hour (1.8 m/s) during an emergency. Thus in case of a fire emergency (and hopefully not trapped), an average individual would have traveled 54 meters a span of 30-seconds and expectantly found a shelter.

So while it is ok to assume a critical thermal radiation threshold value for fatality and injury, we must not forget that this may result in a conservative hazard zone if the  duration of exposure isn’t sufficient.

« Germination of a Failure-Why Does Stuff Really Break Down? – Q&A p2
Preventive Maintenance: Who Said It First? »