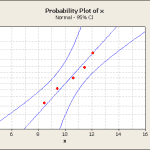 When analyzing a continuous variable or type of measurement using statistics, an analyst often assumes data is normally distributed. But, how can this normal assumption be verified? While there are numerical normality tests, an alternate approach is to use graphical methods. The old adage, “A picture is worth a thousand words”. This captures the idea that the human mind is good at discerning patterns.

The y-axis is a non-linear cumulative probability scale. In figure 1, the scale is unique to the normal distribution. It spans the range from 0.1% to 99.9%. Other normal papers may span a different range. The range 1% to 99% is commonly frequently found. If computer software is used, the y-axis range can be any values greater than 0% and less than 100%. Sometimes the y-axis is marked with decimal values rather than percent.

Consider any data set with sample size N. To plot the data:

Step 3 requires a formula to calculate the median rank. If the data is complete, it has no missing or incomplete data. Then Bernard’s approximation formula may be used, equation 3.

Then, Minitab was used to create the probability plot, figure 3

Minitab’s normal probability plot includes graphic and some basic statistics in the upper right. The middle blue line in the graph represents the best fit normal distribution. The 95% confidence bounds bracket the best fit line. The red dots are the data and show a linear trend about the best fit line. Using equations 1 and 2, $-\bar{x}=10.386-$ and $-s=1.487-$. Visually, one can see the best fit line crosses the 50% grid line close to 10.4.  The data was drawn from the normal population $-N(10,1)-$. These sample parameter estimates differ from the population parameters because of sampling variation.

The Minitab graphics include a probability plot, and key labeling and statistics in the upper right.

The best fit line for each data set intersects the 50% cumulative probability close to the population mean. The tabular statistics in the plot are calculated from the data and show the same. The observed pattern is that different normally distributed variables will intersect different 50th percentile values close to the population mean. Also, the slope changes as the standard deviation changes. Higher standard deviations produce patterns with shallower slopes.

The main purpose of the probability plot is to assess normality. These two examples of normally distributed data produced patterns where the data followed a linear trend on normal probability paper.

What happens if non-normal data is plotted? Consider data values from a population that is lognormal distributed with parameters $-\mu=2.15-$ and $-\sigma=1-$, i.e., $-L(2.15,1)-$. When plotted on a normal probability paper, figure 4, the data does not follow a straight line.

How do normal probabilities and data agree? The best fit line indicates the probability of having data below 0 is about 30%, or about 30 of 100 samples. However, none of the data is less than 0. From the graph, it is apparent that something forbids values below 0. At high values, there is less data than predicted.  For example, the probability of data less than 50 is about 82%. So 18% will exceed 50. So with 100 samples, we expect 18. But, only 5 values exceed 50. The normal distribution predicts more data in the tails of the distribution than are seen in the data. One concludes the data is not normally distributed.

These normal probability plots were created with computer software. It is easy to perform a normal distribution analysis of data.

In future articles, other probability distribution papers and plots, censored data, and adding confidence limits to the best fit line will be discussed.

« Pre-Control: No Substitute for Statistical Process Control
Get Smart of Your Risk Mitigation »