We’ve all seen it…a filing cabinet full of project management plans and procedures from the last job that people have tried to adapt and modify to meet the current project. Amazing that such a plethora can give the impression of effectiveness and, to a skeptic, surprising if they are relevant, read or assimilated.

Just the thought of such voluminous documentation built up historically and covering every aspect of the last project, including its close out, will probably deter even the most ardent project manager.  And incidentally, our ardent project manager is probably just starting up the project in hand and ‘progressive development’ needs to be accounted for.  Are the procedures from the last project wholly applicable given that there may be different stakeholders, different scope, different time frames, different contract condition set cetera, et cetera…et cetera. A good question but oftentimes ignored in the rush to provide ‘management plans’ to meet a client’s expectations and meet a payment milestone.

However, project auditors and overseers (with no knowledge of the project or ownership or accountability) may well see something different.  A plan for everything and everything covered by a procedure…what can go wrong!  But will the plans and procedures be relevant or applicable and will they be read and understood.

So how do we ensure that project management plans are put in place, read, understood and developed as the project develops?

The Risk of Not Being Read

During the Second World War Winston Churchill introduced one page plans and the principles of brevity and simplicity.  He famously quoted that: “This report, by its very length, defends itself against the risk of being read”.

Churchill as with many others throughout history such as Cicero, Blaise Pascal, and Mark Twain has been misattributed the saying, “If I had more time, I would have written a shorter letter”.  This simple saying highlights the importance of the time taken to create such brevity and the value created.

Efficient communication takes time and writing plans that can be read, understood and assimilated quickly is an art.  In an age where ‘cut and paste’ from previous documents and being able to copy masses of information from the Internet may produce educational reports, but we are talking about ‘plans’.

We should be all familiar with the concept that the planning is more important than the plan.  Thinking things through is essential, risks and problems can be identified and solutions and contingencies can be formulated.  But does every single aspect of one’s thinking need to be written down?

A Tuscan proverb may be used to remind us about thinking and subsequent written communication:

Plans are written to explain execution and need not include swathes of theory and ‘teachings’ which detract from the plan itself. If some explanation of theory is required then we should heed the assumptions of Leo Szilard, the conceiver of the nuclear chain reaction, that “You may assume infinite ignorance and unlimited intelligence”.  In this way the reader may be educated, but the question should be asked that if you need to educate the reader, is the reader capable of executing the plan? 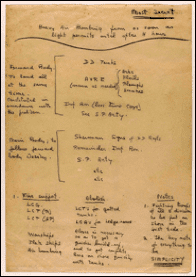 Montgomery’s plan for the D-Day landings was, famously, one page long and was the culmination of many months of planning and communication with hundreds of thousands of hours of military personnel’s input.

Although it was placed on one page it was still ‘most secret’ outlining the ‘plan’ for tens of thousands of troops to take the first step in establishing a foothold on mainland Europe and the beginning of the end of the War. But was the entire ‘plan’ only this single page?  Of course not!  If every other sub-commander had a similar one page plan, and assuming that 10% of the allied troops who landed were in management, there would have been a project plan of some 20 thousand pages! Such a voluminous plan would be far too much for the management team at the time and ‘micromanagement’ would have been the order of the day, fortunately it wasn’t. Possibly key to Montgomery’s plan was that frontline units should be ‘constituted in accordance with the problems‘.  Churchill also advocated “Don’t argue about the difficulties. The difficulties will argue for themselves”.

Plans rely on people and people must be trusted to deal with problems. They need to be trained as to when, and how, problems should be escalated.  No plan is perfect but if, or rather when, things go awry then part of the plan needs to address dealing with problems through a communication process.

Management Plans are produced for every project.  But if we inherent plans from previous completed projects and organisational knowledge is (apparently) included we tend to produce quantity rather than quality.  Unfortunately there is no time left for brevity.

These voluminous plans may be effective and cover every eventuality but they may never be read.  If they are, then the risk of them being assimilated or understood is low.  If plans aren’t followed then there is little benefit in having any plan at all.

Project teams who don’t follow imposed plans may well be blamed and an organisation can maintain a veil of plausible deniability.  If a plan is not simple and brief then its message may be disappear in complexity and any efficiency evaporates….time spent in simplifying plans and communicating them is never lost.