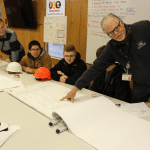 The first person I selected to write about is one who I consider a mentor. I met Marc Zimmerman in February of 1981, at the time he was a Journeyman Pipefitter in Kodak’s Polymer Department and I remember watching him work, making precise gore cut fittings and just being in awe of craftsmanship it takes to calculate, lay-out, cut and assemble these pieces.
The start of Marc’s story is very similar to mine. He had hopes of being a Dentist but after his first year of College he knew he wasn’t cut out or ready to spend several more years listening to lectures, reading text books and taking tests. In the summer of 1972, a neighbor who recognized Marc had mechanical abilities approached him and asked him if he would be interested in summer job at Eastman Kodak.

He spent that summer working with Millwrights setting steel and learning rigging techniques for moving, placing and aligning large pieces of equipment. When the summer ended, he wasn’t ready to go back to school so he asked if his employment could be extended. He spent the next several months working with Kodak’s construction masons mixing mortar, lugging blocks and picking up after the Masons.  Several months later he was approached by a construction supervisor who informed Marc that he had been selected to become a Pipefitter Apprentice.
While he was happy to be offered an apprentice program, he admits today that he wasn’t thrilled to find out he would be working with the Pipefitters. “I had been working with the Masons for almost a year, all the guys I knew were Masons and I wanted to become a Mason. I didn’t know at the time there wasn’t an apprentice program for Masons, and I was happy to have a job so a few days later I was working with the Pipefitters and it just so happens the first Pipefitter I worked with became one of my Mentors.
John Peters, while new to the company at the time, was an experienced Pipefitter with strong set of skills he was eager to share with this new apprentice.  “We would have to look at the drawings, compare dimensions and elevations, and lay out the piping on the ground before welding and assembling. I remember John showing me how to lay out and build a rolling offset and suddenly all that math I had learned in high school started to make sense. Especially trigonometry!”

“John was a great teacher, a tremendous sense of humor, a strong work ethic and one of those guys who really wanted to share his knowledge and experience. It’s funny but at the time you don’t realize how lucky you are when you end up working with someone like John.”

How true….
When Marc completed his Apprenticeship, he was assigned to the Polymer Department in building 317 and he remembers when he got that assignment, he thought about quitting his job.

“I had been through Polymer as an apprentice and had hated the hot areas, the smell of the chemicals and having to wash that stink off you every night. Dick Lauer was the Mechanical Leadman in Polymer at the time and he convinced me that I should stick around. Dick, who also became one of my mentors saw promise in me that I had yet to recognize myself. I can remember him telling me that if I worked hard I could be on a path to go places within the company and he was right.”

It was not long after this that I myself got the opportunity to work with Marc and I can tell you he had all the qualities he saw in his mentors.

Marc had a way of making the work in this godawful dirty, smelly place fun. We worked hard, he shared his knowledge of the trade, and continued to challenge me to learn more. Where some Journeymen would watch you make a mistake and somehow take joy in telling you it wasn’t right, Marc would leave that decision to me. I can remember asking him once if what I had just installed looked okay; “You tell me, are you happy with it?”
No
“What’s wrong with it?”
It’s too short and it’s pulling the vertical out of plumb.
“Do you know where you made the mistake?”
Yes
“Then fix it! And, if you know something is wrong don’t ask me unless you don’t know what went wrong.”
A good mentor doesn’t just pass on skills and experience, they help build confidence and self-esteem. I can tell you that nearly every person I know who was lucky enough to work with Marc Zimmerman became a better tradesperson as a result.
As predicted by his Mentor Dick Lauer, Marc went on the fast track at Eastman Kodak. He was a leadman before he was 30, shortly after a Maintenance Supervisor and Roll Coating Machine Engineer. When his career at Eastman Kodak ended, he worked as a Supervisor at a couple of small manufacturing companies before finding the career that was more suited for his skills and experience.
In 2008 Marc became a Construction Manager working for a company that manages new, large construction projects for Public Schools in Upstate NY. “The company I work doesn’t do the actual construction, we manage the projects from conception to completion. From working with Architects on conception and layout to planning out sewer laterals, foundations and electrical feeds to installing all the hardware necessary to run todays smart classrooms. On top of that I manage the schedule and budget for the project from start to finish.”

“The job requires me to work with all the different contractors and as a result I get to know the tradespeople as well. It’s kind of weird to look back from where I am today managing projects of 20 million dollars and above.”

At the age of 19 or twenty years old you don’t think of where a job in the Skilled Trades can lead you. At the time most of us are simply looking for a way to make a living that would allow us to get out from under Mom & Dad’s roof so we can start our own lives. The thought of being a business owner or managing multimillion-dollar projects isn’t even in the realm of what we believe we are capable of.

“When I look back at what I learned in that Apprentice Program and where it has take me in my career, It makes me want to find a way to give back. The last project I completed was the upgrade of one of New York’s Trades Schools. This is a school where High School aged kids can go to learn the basics of residential trades like carpentry, electrical and HVAC. While working on this project I was able to meet some of the school instructors and asked if there was any way we could somehow involve the students in the project as a learning experience. The result was what we called the Construction Club. As part of this club, the students were exposed to the drawings and plans for the project and allowed to watch as the different phases of the project progress.”
“It was a great experience for the kids but in the end, I couldn’t help but think there needs to be something more. A school that’s focused on the industrial trades that has class time and practical hands on time, a more accelerated approach that produces tradespeople who are ready to go out after a year of intense training and start working in the manufacturing world. If we could figure out a way to do that, I might never retire.”
“We need to somehow get young people to understand that learning a trade is not only satisfying, but it opens up a world of opportunity.”

I couldn’t agree more!
« Work and Play, Hard Smart and Together
Mind Mapping for Non-Linear Thinking »