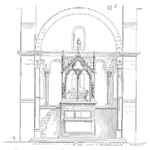 One aspect of HALT, (a test to find weaknesses and reliability risks empirically), is the difficulty for many engineers that are new to the HALT- that it guarantees that the maximum or recommended operating environmental specifications for the system and components under test will be exceeded, and failures beyond spec are potentially relevant to field reliability.

The goal in HALT is to empirically discover how much strength or operating margin beyond the end use stresses and whether the strength or capability of the product needs to or can be improved.

That is the key goal of HALT, to find empirical margins beyond the designed specs and not theoretical operational limits.
The empirical limits of devices must exceed design ratings as all must have stress margins to allow it to meet published environmental specifications allowing for the inevitable variations in all tiers of the manufacturing processes.

There are no industry standards for component manufacturers to provide thermal ratings.

When we purchase a consumer electronics product, we generally want to know that it will operate in most environmental conditions we humans operate in. Of course, we have inherent understanding that some environments, such as water immersion or usage conditions, we expect have to be explicitly identified by the manufacturer as “water-resistant” (and not waterproof) to a specific depth or pressure.

Unfortunately, many smartphone users have discovered that most cell phones are not “water-resistant” when accidentally dropped in a lake or a commode. This is changing due to consumers demanding more survivability of water submersion accidents many manufacturers are designing their phones more capable of surviving water immersion and even taking pictures underwater.

Some thermal specifications are expected to be exceeded

Many portable electronics producers are no longer specifying temperature operating specifications. Yet some popular brands of consumer electronics such as the Samsung Galaxy III smartphone and Apple IPhone and IPad (3rd generation and later) have listed the manufacturer’s maximum operating temperature of 35°C (95°F) [1].

This means that if the device is operated it when it is at human body temperature (37°) it is operating outside the manufacturers “rating” and technically voiding the warranty.

Of course, many of us carry our phones in in a shirt or coat pocket, or when outside on a hot summer day and using it above 35°C is a “normal use” condition.

Yet most users will agree to these limited specifications through the EULA (End User License Agreement) required for using the product, although probably unknowingly since most EULA’s are probably signed without actually reading through the details.

I would guess that few users know operating specifications not just cell phones or computers but most electronics they own. Most users probably do not care; they just want it to work wherever and whenever when they need to use it regardless of specifications. The portable phone, tablet, and PC market would quickly reject a product that cannot operate in most temperature conditions that humans commonly function in.

I know the iPhone 6 has an internal high-temperature monitor circuit, as I have had mine display an over temperature message “Temperature: iPhone needs to cool down” on the screen when trying to turn it on after leaving it in my car on a hot day in the summer. After it had cooled it operated normally, as I would expect. I am certain the smartphone market would not accept the phone failing completely and not be covered under warranty a not uncommon event.

The persistence of this standard temperature specification, regardless of its validity, sometimes costs real money. In many parts of the world air conditioning is not available and the outside temperature regularly exceeds 35°C much of the year.

For some IT equipment producers, the 35°C maximum operating environment specification prevents bidding on contracts from worldwide enterprises that require a warranty valid for an operating specification of up to 40°C. The inability to bid on large contracts, even when there is no supporting data behind the reasons, has costs some enterprise IT hardware equipment companies serious money.

Why specify the maximum thermal operating conditions lower than normal use environments?

So why do manufacturers specify a maximum temperature that is below use temperatures for many consumer electronics used in normal human environment conditions?

There is no clear answer.

It could have been based on the traditional reliability prediction models of electronics for semiconductors, such a Military Handbook 217A (MIL-HDBK 217) first published in 1959. It was believed that the failure rate of semiconductors was dominated by temperature.

The resulting life models were based on Arrhenius equation, predicted that the failure rates of semiconductors doubled for each 10°C increase in temperature. There is no data to support this long-held and misleading belief and has led to many referring to the Arrhenius equation as the “erroneous equation” as it was so widely misapplied for electronics life predictions.

Yet it would be easy for a company like Apple to record the phone’s temperature and declare the warranty void if the phone log showed it was operated beyond a 35°C environment. The point is that it doesn’t matter what the ‘spec’ is, it is the consumer and market that is the ultimate judge and decides whether a product producer has made a reasonably robust device. They are the judge and jury of whether a portable product is flimsy or robust if it fails after any stress condition.

Most consumers would blame themselves for failure if a portable device if did not work after being accidentally dropped 4 meters, or being run over it with a car. But most all consumers would consider a cell phone that did not operate above 35°C a poor design and unreliable, and it would not last long on the market.

So does setting a user environment specification really matter? No, not really for the consumer market, as the market competitors and consumer demands will ultimately set the benchmarks for how robust consumer electronics should be.

« Understanding the Design Process
Show me the Data »