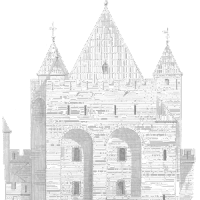 Speaking reliability-wise, parallel, means any of the elements in parallel structure permit the system to function. This does not mean they are physically parallel (in all cases), as capacitors in parallel provide a specific behavior in the circuit and if one capacitor fails that system might fail. 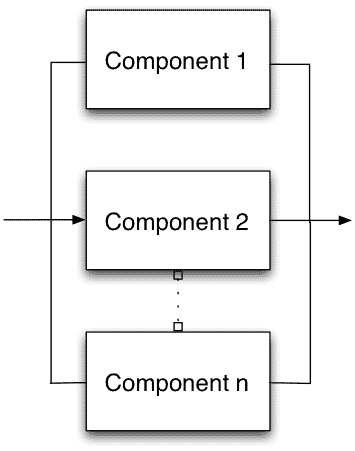 In this simple drawing, there are n components in parallel and any one component is needed for the system to function.

If component #2 fails, the others will permit the system to functions.

Simple. And, very useful. This construction permits the improvement of reliability overall, even above the reliability of the individual components. Unlike series system where the weakest component limits the reliability, here by adding redundancy the system reliability improves.

What is the chance of having two failures? The formula is based on the probability of component 1 or component 2 operating. Without doing the derivation, we can write the reliability of the 2 component parallel system as:

This get’s very complicated quickly with more than three components in parallel. Before exploring another way to calculate parallel systems, there is a special case situation to mention first.

When the components in parallel are the same (reliability wise), then the above simplifies to

Which should be obvious.

Often it’s easier to do parallel system calculations using the unreliability, or 1 – R(t). This is also the CDF or F(t). The math is now more like a series system with one correction. For the general case, the system reliability formula for a parallel system becomes

So, let’s say we have five components with Reliability at one year of use, R(1), at 90%, or 0.9. Calculate the system reliability.

Using the above formula and setting the reliability of each element at 0.9, we find

which is very reliable.

It’s expensive to add redundant parts to a system, yet in some cases, it is the right solution to create a system that meets the reliability requirements. Of course, actual systems have many variations and complications over simply setting components up in parallel. Load sharing, hot, warm, or cold standby, switching or voting systems, and many others can complicate the construction of a parallel system.

Using components in parallel is the only way to increase the system reliability over the limits of individual component reliability.

k out of n (article)