I was recently in New York City for work.  I stopped by to see a friend in the area.  He said “I have something interesting to show you.”  I was pretty excited because when Mark says “I have something interesting to show you.” you know it is going to be good.  He’s a writer and his passion is finding strange and interesting things.  My personal Indiana Jones.  Many days he wakes up and just gives himself some adventure assignment and the goes searching for it.

For example, last year when he said that phrase “I have something interesting to show you” he took me to a dystopian shut down steel refinery in Bethlehem PA.  It was totally surreal to climb around all this gargantuan machinery in such a dilapidated state.  You could feel what it must have been like to work on it.  Another time he took me a section of abandoned highway in Pennsilvania that Hollywood uses to shoot post apolocalitpic scenes for movies/shows. So you might have seen it in movies like ‘I am Legend” and “Walking Dead.  We once ended up at Mario Andretti’s house, the famous race car driver.  The insane thing is that wasn’t our destination, we were headed to a historical bakery. The day started with looking for a bakery in Rosetto PA  where an interesting heart study occurred back in the 60’s.  One of the kids that was in the study was there (now in his 70’s) and we got to interview him about the whole experience.  It turned out he was Mario Andreti’s optician.  So we went to Mario Andretti’s house. So I was excited to see what I was in for and stayed an extra day in the area.

We went to Hackensack NJ and as we went downtown he wouldn’t tell me what it was but told me to keep my eyes open and look for tall grass as we get to the town center.  I kept my eyes peeled.  Then I saw it, something out of place for a town center.  The river running through the town was so small I hadn’t even seen it.  There was a tower coming out of the tall grass and bushes on the river bank.  It looked like the top of a submarine.  It was a freaking submarine.  A WWII submarine just there on the river bed stuck in the mud.  It’s a retired active WWII submarine names the U.S.S. Ling.

Just to give you a sense for how strange this all was the river is 280 feet wide. When I walked to the edge of the river if I had not cared about my clothing I could have walked a few feet into the knee high water and touched it (or climbed on it).  This submarine was 311 feet long. So the scale of the entire scene when you were in front of it was ridiculous.  If you turned the sub in the direction of the far bank it wouldn’t be in the water, it would be a bridge spanning from shore to shore. To add to the oddity Hackensack NJ is 25 miles from the ocean. 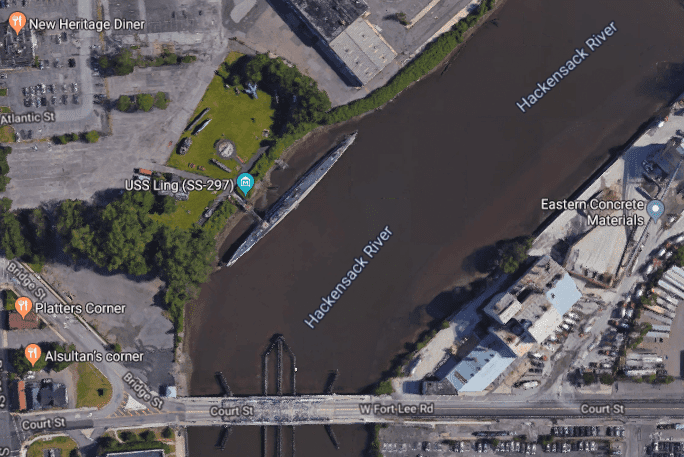 So having been brought there without knowing anything was just overwhelmingly puzzling (which was what Mark was going for).  The only question in my head was “Who messed up?”  There was some evidence of other items in the grassy area near it.  There was a circular cement area and some cement bases that could have been for statues but the shapes were strange. They were actually bases to display torpedos.  The submarine was brought there in 1973 to become the centerpiece of a museum. The museum closed decades later and now has had it’s building and other items removed from the site, so only the submarine remains.  The river is much more shallow then it was in 1973 due to the Oradell Dam.  So the Ling settled into the mud which holds it now like epoxy to the shore. The internal valves had been opened by vandals and she filled with a few feet of water which made her settle in even deeper. It’s unlikely even a set of tug boats could get it out of there. Removal would be some epic cut up operation with the pieces trucked or barged out, and probably at a cost of millions of dollars.

Plans are interesting.  Plans are individual steps linked to each other.  But what happens when the landscape, outside factors, or objectives change?  In product development we make many plans, product plans, test plans, process plans.  There was something very familiar when looking at that submarine when I thought about the people and sequence of events that lead to it sitting there. I’ve been one of those people.  Trying to make the right decisions as everything goes sideways.

The Ling was supposed to be on show as a reminder of our fighting spirit against oppressors during a time when the world needed heros. Now it’s just an embarrassing display of failed plans that the people of Hackensack and their visitors have to look at everyday.  My hypocrisy meter is registering pretty high right now.  I’ve been that guy with little or no backup plans for the unexpected. So have you. 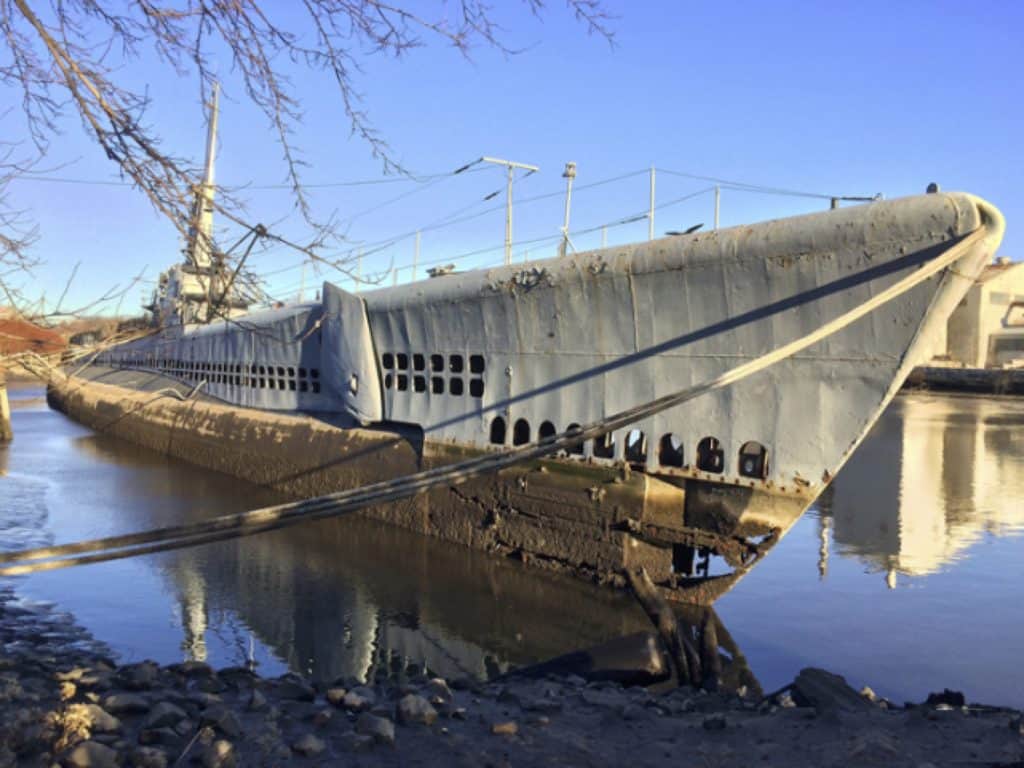 Do we make enough contingency plans for the outside factors that can change the landscape we are working on?  In the excitement of creating something new we naturally only focus on the steps to accomplish it.  But most failures are simply a culmination of a bunch of small issues that have stacked up. The investigation of most disasters usually conclude this instead of a single “smoking gun” that we always expect to find.

The submarine was there because they didn’t consider what to do if the museum has future funding issues.  There was no consideration for the submarine or ever moving it when they built the dam that changed the river flow and level.  They didn’t evaluate how silt would build up around it as it sat there. Rivers change the shape of their banks over time, we all learned this in grade school.  They didn’t protect it from vandalism after the museum closed until a plan could be put in place to move it.  Each of these factors seem simple, obvious, and a good investment in hindsight.  Ok that’s nice but would it be done differently now that we know that? Of course it would, or would it?

I didn’t believe it would.  All the same pressures that directed those decisions would still be there.  How many product development plans have we participated in that have had “challenging” or even disastrous outcomes?  Outcomes as bad as the FDA shutting the operation down until an investigation and proof of better practices can be shown.  A contract being cancelled because of scope creep or an extended schedule. Do we do it differently once we are back in operation?  Not always.  It would seem that the pain of defeat doesn’t’ last as long as we think and we go back to business as we have always done.

So why line ourselves up for another smack down?  It seems that we don’t evaluate the forces that push us to make bad decisions.  Strong will alone has never corrected long term habits. What I try to have my clients realise is that change in operation never occurs unless you address the forces that direct those poor decisions.  Its’ too easy to get worn down and make the bad compromises.  For product development this may be short sightedness on budget, time to market, technology or staff investments.

Those forces on top of you day to day can easily make the concerns of failure after product launch get pushed to the back of your mind.  It’s imperative to create mechanisms in your process that keep these forces at bay.  The outside pressures should be there, budget, time to market, limited resource, but they should be in balance with the long term objectives, not short term. Find ways to include mechanisms in your processes and plans that drive the correct balance between short term needs, program goals, and long term issue mitigation.  It’s not hard to do if we create the balancing mechanisms in advance of having to make the hard decisions.  When the hard decision is in front of you it’s too late.