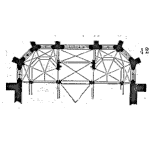 A Petri net graph is a depiction of a system using a symbolic language.

The modeling permits the analysis of complex systems or networks of systems.

It is possible to include elements of the system that are neither function or failed. In other words, it permits modeling a system when one or more of the elements are in a degraded state or under repair.

Petri net modeling is useful when the repair/restore times are long compared to operating times, as reliability block diagrams and fault tree analysis approach assume short or insignificant repair times, in most cases.

There are a range of types of Petri nets useful for reliability modeling including:

Transitions or the events that may occur are represented by bars.

Places or conditions are represented by circles.

Tokens are dots within Places which represent a specific configuration of the net called a marking. As the network experiences transitions, the tokens move across the model.

The two tokens, dots, represent two units in the system. The three circles, places, present the three possible states each unit finds itself: Up or operational; Standby or ready and not operating; or Down meaning the unit is not operational or failed.

The transitions, the bars, contain information on the timing and frequency of moving between states following the various arcs.

It is beyond the scope of this work to fully describe Petri Net modeling other than this brief mention. The modeling of complex systems is often done using computer modeling tools.

I’m glad you brought up the topic of Petri Nets on Accendo.  I actually co-authored a couple of articles with Vitali Volovoi on Petri Nets:

Also in Practical Reliability Engineering Ed.5, I added section 6.12, which is dedicated to Petri Nets basics with an example

« The Maintenance Management Excellence Path
Environmental and Use Factors »