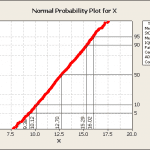 In my prior article, “A Primer on Probability Distributions”, the usage of different types of histograms to display data was discussed. The histogram would acquire a bell shape if the data were normally distributed. The main limitation of the histogram approach is that the shape of the histogram can change radically with the selection of the bins used. Instead, a probability plot could be used.

This article discussed probability plots. They are extremely useful for the analysis of big and small data sets.

Given a set of data, the first step should be to calculate the median rank. First, the data is sorted in ascending order. Then an order number, starting at 1 for the lowest, then 2 for the next lowest …ending at N for the largest, is assigned to each value. Rank Order statistics provides a means of determining a probability distribution for each value. Each probability distribution allows a median to be calculated. A reasonable approximation of the median is provided in formula 1.

Let’s take a sample of 1000 values that are uniformly distributed, calculate the order number and median ranks. Then the median ranks and data are plotted figure 1. 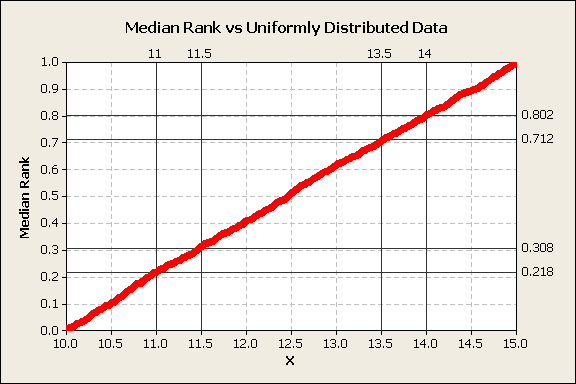 This chart shows that uniformly distributed random variables plot as a straight line when plotted against the median ranks. The fraction of data contained within each x interval is linearly dependent on the interval width. The percentile between 11-11.5 is the same as the percentile between 13.5-1, i.e., 9%.

The median ranks are the cumulative percentiles. 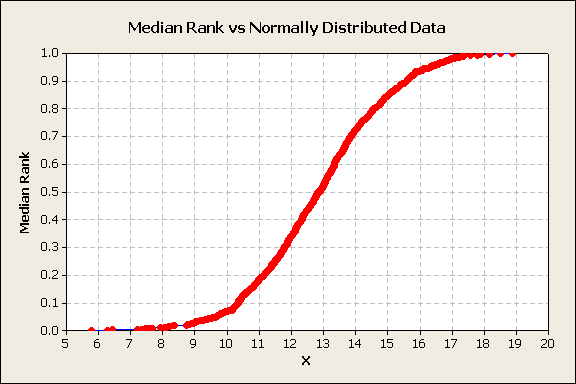 The plot of median rank vs. the x values is a cumulative distribution plot. It demonstrates an S shape curve. For purposes of making projections, it would be nice to determine a transformation that will linearize the plot. Fortunately, an inverse of the standard normal will accomplish this task. The y-axis is z-score, the number of standard deviations each x value is from the mean, figure 3. 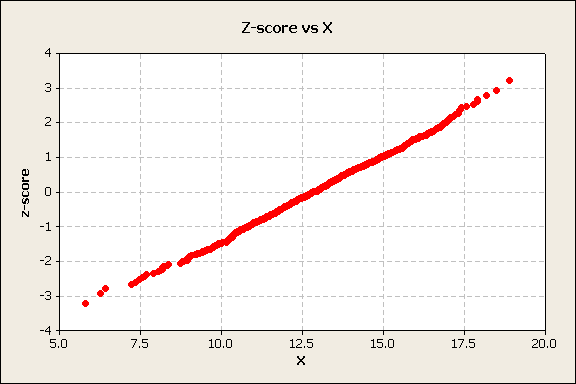 The inverse normal transforms the y-axis and linearizes plots of normally distributed data. However, to determine percentiles, it would be convenient to have a probability scale on the y-axis. This is accomplished by replacing the z-score values hand horizontal lines with ticks, labels, and horizontal lines that correspond to normal scale probabilities, perhaps 1%, 5%, 10%…90%, 95%, and 99%. This is called a normal probability plot, Figure 4. 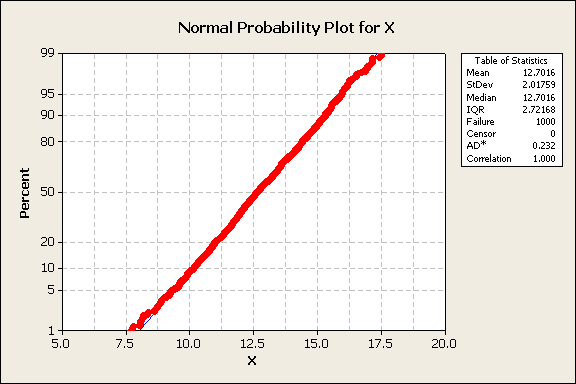 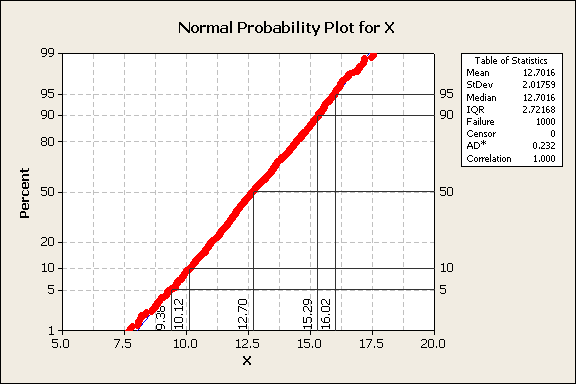 For reference, if x is normally distributed, then

Here, f(x) is the probability density function of x.

A similar process occurs with lognormally distributed data. The data is sorted, ordered, median ranks are calculated, and plotted, figure 6. 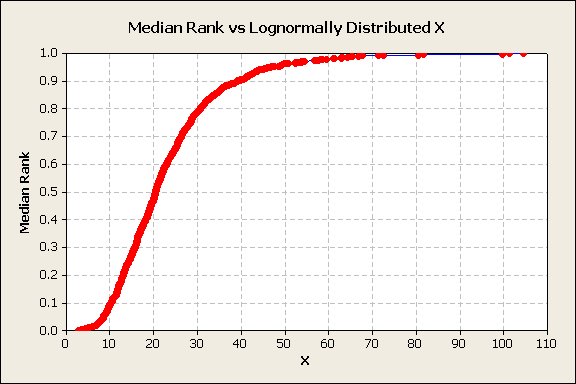 The data is obviously not linear when plotted against the median ranks. None of the data is below 0 and a few very large x values skew the distribution to the right. A log transformation is tried and produces a typical S-shape plot, figure 7. 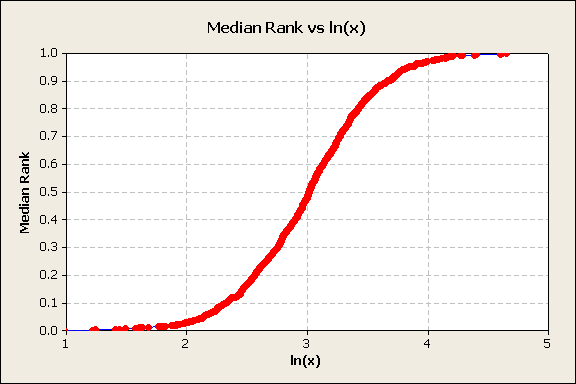 The S-shape suggests the inverse normal transformation of the y-axis, figure 8. 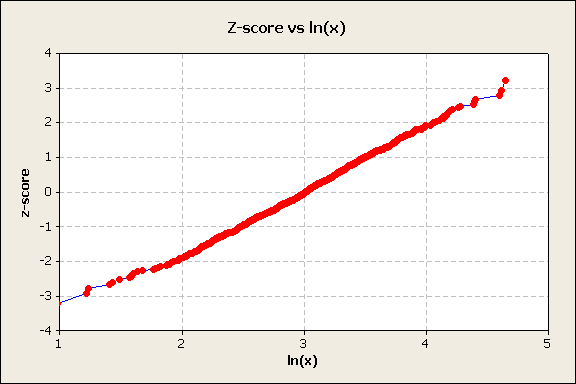 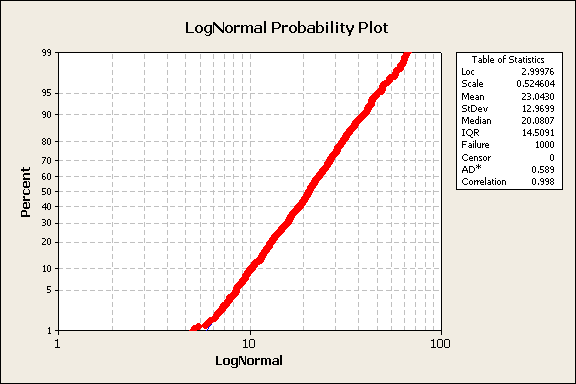 Minitab provides a table of statistics on probability plots. Note the data correlation to the best fit distribution is 99.8%. For reference, the lognormal probability density function is shown in equation 3.

Here, f(x) is the lognormal probability density function of x.

The common actions are

Alternatively, one can perform actions 1 to 4 using commercial software. I use Minitab software, which has a distribution ID plot that a plot using multiple distributions. An analysis is the lognormal data using the Minitab ID plot is, figure 10. 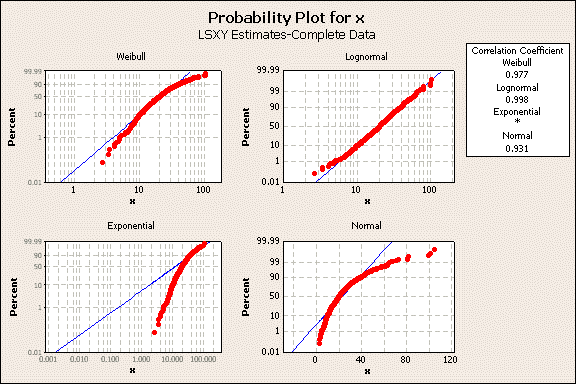 This discussion did not cover any confidence limits on the distribution. These confidence limits become important in the analysis of small datasets but are less significant with large datasets. This topic is reserved for a future article.