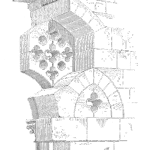 There are a few different reasons we explore differences in scale.

Keep in mind that the scale of a dataset is basically the spread of the data. For most datasets, we’re examining the variance.

Hypothesis tests comparing means vary depending on the assumption of equal variances. Thus testing that assumption requires methods to adequately test the homogeneity of variances. The F-test should come to mind as it is a common approach.

Some datasets do not lend themselves to using the F-test, which is applicable using real numbers. Some datasets gather information that is ordinal or interval data, thus we need another approach to test for differences in scale.

A Non-Parametric Difference in Scale Test

The Siegal Turkey test is a non-parametric test for the comparison of data that is at least ordinal. It also provides a nonparametric method for interval, integer, and real data.

The key here is the ranking assignments of the data. If the spread of the two groups of data are the same then both groups will have values at the extremes of the combine set in equal proportions.

If not, then one group will end up with a small set of rank values than the other group, thus allowing the Wilcoxon rank sum test to detect the difference.

Let’s examine some temperature data gathered over a week of operation.

There are two lines in our factory, line A and line B. The chamber temperature at one stage of the process is critical to the reliability of the final product.

We suspect line A has less variation in temperature then line B.

The null hypothesis is the two lines and the variation of the temperatures are the same.

The alternative hypothesis is line A has a less spread of temperatures then line B.

Underlying the test, we are also assuming the two groups have equivalent medians.

Step 2 Combine and Sort the Data

Maintain which reading is from which line. The ordered readings are from lines A or B as follows (here a table may be helpful):

Continue assigning ranks alternating the next two smallest, then next two largest till all values have a rank assigned.

The Wilcoxon rank-sum test uses the sum of the ranks for the two groups. The rank sum for line A and B readings are:

If the null hypothesis is true the two sums should be about the same given the sizes of the two groups of data.

Part of the Wilcoxon rank sum test is subtracting the minimum possible rank sum from each total. The minimum value is found using

The U statistics for this set of data are:

The critical value with a one-sided 5% significance is 29.

Note: the paper has other tables for n1 from 1 through 20. With more than 10 samples per group, there is a normal approximation approach available.

Since the test statistic, 16 in this example, is less than the critical value, 29, we do have convincing evidence to conclude the two groups of readings have different variances.

A visual check confirms the variances are different. 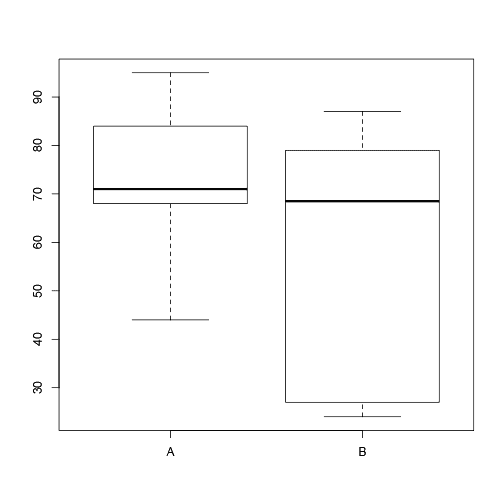 Have you checked if your variances are the same or not? What is your go-to test?