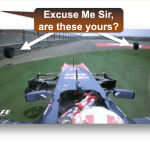 This video clip looks like a disaster but is actually a visualization of precision reliability engineering………. right after a disaster .

” The perfect race car crosses the finish line in first place and then falls to pieces.”

In this case, the car did not cross the finish line but what occurs demonstrates an amazing accuracy in use-case, environmental, and mission profile definition… Ferdinand’s goal.

The two suspension sides look like they blow up simultaneously as if the car hit something.  But in fact what has occurred is that one side failed, a likely manufacturing or assembly issue (Somebody made a mistake!), followed a split second later by the second suspension system failing, seen in this frame. It’s evidence of very impressive engineering.  I’ll explain why. 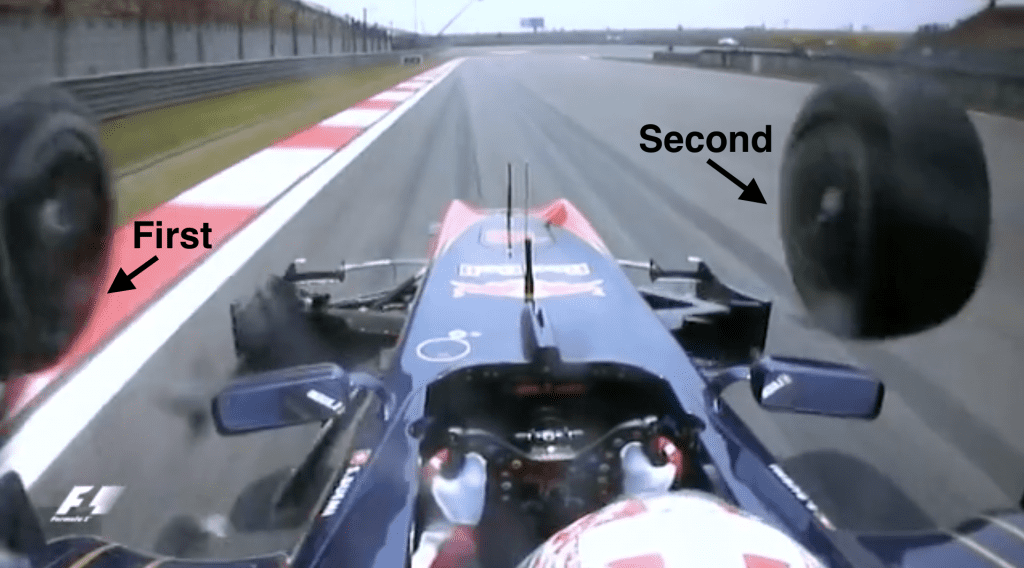 Ferdinand Porsche’s quote highlights how racing is a competition on who can balance performance and reliability perfectly.  Any added reliability (overdesign) slows down the car.  A car that get’s maximum performance can’t handle any variability and surely won’t finish.

The goal is to accurately characterize all inputs and anticipated variabilities of use cases, environmental inputs, and design so life is consumed completely in a determined “use life”.  Any remaining life is a waste.  In design,  we often compensate for rough estimations of use cases  (lazy) with large safety margins, which waste money and performance. We can then quickly dismiss the importance of reliability analysis and testing tools until we find out we don’t have a competitive product or that our over design didn’t cover all the use case “estimations” and we have failures.

Auto racing, especially F1,  is the ultimate reliability test and engineering competition, so cutting corners will be exposed very quickly and for all to see.

So what is happening in the video?

What is occurring is a demonstration of a design that is only as strong as it needs to be so it can be as light as possible. The weight of suspension components is more critical than anywhere else in the car because it isn’t just acceleration, braking, and cornering the is affected if too heavy. It adds “unsprung weight”, weight not carried by the suspension, which can kill the cars ability to keep traction on uneven surfaces. 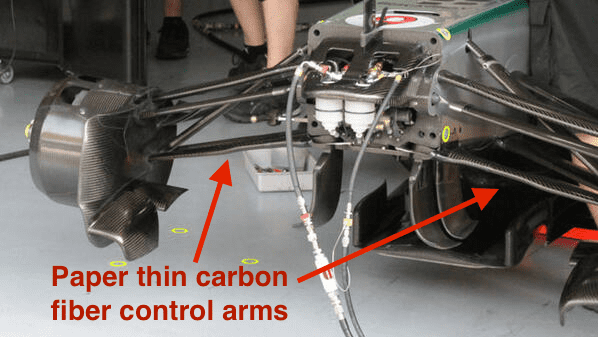 As I mentioned the video is deceptive in that it looks like both sides of the front suspension are exploding in unison.  But the split second between them is the second reacting to the first failing.  The second system fails because there was no point in designing it to be strong enough to handle the situation when it’s partner dropped out. This all is occurring under braking. Under braking, the suspension control arms are getting their max loading as they decelerate the car at 4g. I don’t know how the drivers don’t blackout?

Both front wheels are sharing this load.  When one fails it’s not like the other takes double the load.  Each wheel is already at maximum traction in braking force.  Any increased request for braking just results in the tire skidding.  But there is a slight increase in loading on the remaining suspension arms because when the one side fails the other side is now carrying a little more weight which does allow a bit more traction, thus a bit more braking force.  And it is very little.  This slight increase in stress causes the remaining suspension components to fail.

So what we have seen is a demonstration of a system that has such a low-stress margin that is can survive the intended stresses for the use life cases and nothing more. It is a precise design based in a very accurate use and environmental profile that wer inputs to reliability techniques we so commonly discuss, Stress Margin testing, Accelerated Life Testing, Use Case profiling, etc

A very Impressive demonstration of precision engineering that has lead to many checkered flags.

« Risk Management and Fear
What Is A Key Performance Indicator (KPI)? »