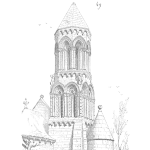 British engineer Robert Whitehead began his career producing textile weaving machinery in France. In 1856 he moved to the Adriatic coast to manufacture marine steam engines. He met Giovanni Luppis, an Austro-Hungarian navy officer, who had been developing a self-propelled coastal defense weapon that could be floated into an enemy fleet. Together, they failed to develop a practical weapon. Whitehead remained fixed on the idea of a submerged, self-propelled weapon. Working on his own for two years, Whitehead developed the modern torpedo. He sold his first units to the Austro-Hugarian Navy in 1867.

The Whitehead torpedo contained new, secret mechanisms for depth control and course stability. This expensive and secret weapon contained finely machined parts and mechanical control systems.  Launch tubes were often on a deck open to the weather and seawater spray.  Submerged tubes required flooding the tube with seawater to eject the weapon.  Normal practice drills with torpedoes included loading and flooding the tube with seawater.  The torpedoes were also fired for practice with a dummy weight in place of the warhead, then recovered and refurbished.  The firing exercise caused wear on the mechanisms and exposed them to seawater, which dried to leave a salty encrustation.

The Whitehead torpedo’s effective range was only 800 yards. This was well inside the defensive firing perimeter of smaller deck guns. A torpedo boat only had minutes to dash in, position, fire, and dash off as the target’s defensive guns swung into position.  The unguided torpedo had to be released in a specific direction at a moving target, from a moving boat. Ensuring that the complex torpedo and launcher would function on demand was certainly in the sailor’s best interest. Reliability of firing was critical: at best the pricey weapon would travel in a straight line at a preset depth. Any hesitation could mean a miss. While the boat crew was getting into position, the target’s small deck guns were targeting the torpedo boat. Small deck guns normally had a 10,000 yard range, and could fire a 3-inch shell every 5 seconds. The most valuable targets were larger ships with many guns, guaranteeing a constant stream of return fire. The torpedo system’s maintenance program had to deliver perfect reliability.  When it did, a small, fast boat could threaten a major battleship. This could change the balance of power between small navies and large ones.

The US Navy began using the Whitehead torpedo in 1892.  A US Navy manual published in 1898 contains detailed assembly, disassembly, adjustment, and troubleshooting procedures.  It included extensive parts lists and an inventory of special tools. The manual also included maintenance instructions that were both time based and conditional. Exhortations about lubrication and cleanliness were repeated.

If the torpedoes had been used in firing practice and were then stored in launching-tubes, they were inspected once each week. The manual had a special inspection point for rust at “at the point where the packing band was in contact with the shell of the torpedo.”   The reducing valve, controlling valve, and steering engine required cleaning and a light coat of oil every six months.  If the torpedo was idle, every six months, the stop-valve, charging valve, depth index, and exterior steel screws had to be turned to keep them from setting.

The second section contained chemistry checks of the explosives.  Maintenance included weekly, monthly, and quarterly litmus paper tests and weight tests of the dry primers, wet primers, and the wet guncotton that was the main explosive charge.   The third section detailed steps for tests required after assembly and before practice firing.

The reliability problems and maintenance burdens were one of the arguments against Whitehead’s expensive device. Other designs were available. In 1889, John Townsend Bucknill, who was heavily involved developing British mining and harbor defense, criticized many of the Whitehead torpedo’s characteristics, including “Difficulties in Maintenance — Constant attention and care being required to keep the torpedoes and their impulse arrangements clean and efficient.”

Further Royal Navy experience with the Whitehead torpedo was related in Torpedoes And Torpedo-Vessels, published in 1896 by Lieutenant George Eliot Armstrong, RN.

Whitehead torpedoes require an extraordinary amount of care if they are to be trusted to do their work properly. The different working parts, and the shell of the torpedo itself have to be jealously guarded from rust, and constantly examined. Each torpedo has its own history-sheet, in which is entered the particulars of every run which it makes and every alteration or repair effected [sic]. (pg 59)

The history sheet, of course, would be a handwritten record of the entire history of that particular machine. This is something that software maintenance systems strive for today by using failure code libraries and long text fields. In this context, torpedo boat officers could correlate range shot performance with the history of maintenance, prior use, repairs, and alterations. They grew to know their weapons individually and could select which one was the most likely to have success in action. In Armstrong’s words, “…each torpedo has its own idiosyncrasies, which have to be carefully studied and corrected continually if it is to be trusted to perform its duty properly when the time comes for it to start on its one and final errand of destruction, and give its puny life for the life of a ship.” (p. 8)

Armstrong gave examples of the test and maintenance program that were similar to the American manual:

Every month, all the circuits, batteries and instruments throughout the ship are thoroughly examined and tested. Every quarter Whitehead torpedoes are run from the ship when in harbour at the rate of two runs from each tube. In the same period also two runs are given from each tube with the ship under way. Every half-year the discharging apparatus is thoroughly overhauled, and the torpedoes carefully gauged. Every year the warheads and guncotton are weighed and tested, and every three years an internal examination is made of the air chambers. (pg 60)

He also described the shore repair shop and included a picture of torpedos in storage. The supply of repair parts was very important:

These stores are kept in a manner which is almost ludicrous in its exactitude. Every pattern of tool, bolt, pin, screw, spanner, wheel, cog, socket, or plate belonging to torpedoes has its own separate locker, and every item is carefully numbered and accounted for. As an example of the care with which the stores are kept it may be mentioned that a particular tiny pattern of brass screw which forms part of the torpedo’s mechanism, and which is valued at about 2ld. per gross, is never allowed to be a single number wrong. On one occasion when the stocktaking took place, it was found that, instead of 5,000 little screws being accounted for by the man who was told off to count them, there were only 4,997! Several foolscap letters were written and exchanged over those three little screws, though their value was not more than a small fraction of a farthing. Better, however, to be too careful than too slack about such important stores as these. In any case the excellent manner in which they are kept is a proof of the soundness of their arrangement.

In 1885 and 1886, torpedo boats, both first and second class, were built by Austria, Chili [sic], China, France, Greece, Italy, Portugal, Russia, Spain, Sweden and Turkey. The United States still stolidly refused to take a lesson from the old world, and for reasons best known to herself, refrained from building anything more than one experimental second-class [torpedo] boat. (pg. 177)

The Sound of Music and the Musical von Trapp Family

Licensing and sales to more than a dozen major sea powers including Britain and Austria-Hungary made Whitehead wealthy. Whitehead’s children and grandchildren married into nobility and politically influential Austro-Hungarian families, especially Hoyos and Bismarck. A son was the British minister to Serbia; his grandson was Prime Minister of Rhodesia. Another Bismarck grandchild of Whitehead’s, Gottfried Graf von Bismarck-Schönhausen, was a Nazi SS General who was removed after the Operation Valkyrie assassination attempt of Adolf Hilter.

Whitehead’s granddaughter Agathe inherited the money he made producing the torpedo for Austria-Hungary.  She married the Austro-Hungarian submarine officer Georg von Trapp. She was a baroness; he was a nobleman (a Ritter.) He commanded three submarines. Von Trapp  was familiar with the Whitehead weapon, having studied torpedoes at the Whitehead factory in Fiume.  During the First World War, he sank 11 merchant ships, a French cruiser, and an Italian submarine.

Agathe died in 1922. Later,  Georg remarried his children’s tutor, Maria.  We know Maria, Georg, and the children through The Sound of Music as the von Trapp family.  The inherited Whitehead torpedo wealth is embellished in the movie, but you can view their actual Salzburg residence in Google street view.  The glamorous setting was made possible, at least in some part, by the torpedo’s maintenance program.