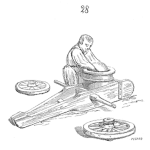 In 1873, the superintendent of the Montreal Water Works signed out a manual for his organization:

This was not a human resources manual and unlike today’s employee handbooks did not contain a dress code. It listed roles and responsibilities of the major departments and key positions, beginning with the duties of the chief engineer and the organization that ran the steam power plant.

The first reference to safety is in the duties of the Chief Engineer, with overall responsibility for “all possible economy consistent with the safety and efficiency of the works.”

The engine-house operator was required to execute an emergency shutdown of the boiler and engine “in the event of anything occurring to the Machinery or Boilers by which their safety may be endangered.” A similar rule applied to the wheel-house operator.

Workers were responsible at the end of the day, to report if an excavation worksite was safe, so that the nightwatchman could prepare lights. This was a fireable offense.

Other elements of safety overlapped with boiler operation and maintenance rules. These rules about boilers came at a time when the cause of boiler explosions was still a matter of scientific inquiry. Safety regulations were still being publicly debated in Britain and the United States. However, France had national boiler inspection laws for half a century at this point.

The chief engineer was responsible for conducting set-point check of the boiler safety valves. He was also required to establish the safe operating pressure limit and post it with his signature. Boiler operators had a rule to check for feed water every half hour. Firemen were to pay particular attention to cleaning the boiler.

Administrative reports included daily operations reports, weekly manpower reports, and monthly parts inventory use. Breakdowns of field equipment like hydrants and valves were required to be recorded in a log book.

In 1912, a history of the Montreal water system was published and gives some context to the incorporation of steam power. It can be read here: https://www.canadiana.ca/view/oocihm.86902/1?r=0&s=1

Superintendent Lesage was pictured in the 1912 history along with the mayor and other commissioners. The history related some of Lesage’s accomplishments in expanding water service.

By 1885, Lesage reported to the commission that he was fielding a solution to frozen hydrants:

“The old hydrants with brick chambers are giving a good deal of trouble in winter, from their liability to freeze. Several years ago the non freezing hydrants were introduced and are gradually taking the place of the old kind, being substituted for them as fast as these latter give way. Out of 936 fire hydrants in the city 177 are non-freezing, and I believe the sooner the change is completed the sooner will the cost of their maintenance be diminished. But this change will cost about $35,000 and cannot be done all at once without taxing too greatly the city revenue.”

(insert…picture of lease and snippet of repair report of 1879)

About the same time, the Lake Shore and Michigan Southern Railway had a similar set of employee rules and regulations. This manual contained about a dozen requirements where the safety of the train was cited. The introduction directed the employee that they were responsible for extreme vigilance for the safety of all their tools, equipment, acts, and acts of of other employees and that they should take extra time to convince himself that all is safe. However, the opening also tells the potential victim that they assume all risk from employment there.

This railway rule book specified that steam pumps be lubricated with tallow, and that their oil cups should be able to run for 5 hours. Air pumps and brakes were different and required coach oil.