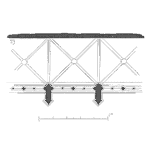 I may have the name, waterfall, used incorrectly here.

Years ago I learned from a former Apple reliability group manager how to organize reliability and environmental related testing where samples cascade through a sequence of stress conditions and evaluations. He called it waterfall testing.

When Failure Mechanisms Require a Sequence of Stress to Occur

For example, it is rare to have the ability to thermal cycle, vibrate and elevate humidity stresses in a single chamber. If we know the our design’s seal deteriorates when exposed to high humidity conditions, while the primary cause of failure is due to thermal cycling and vibration. The damaged seal permits the ingress of liquid water resulting in corrosion of critical electrical and mechanical components.

Thinking through each stress and associated excited failure mechanisms you may find a sequence of aging and follow on applications of stress or evaluations that minimize both testing time and required testing resources.

For example, we may be able to electrically stress a set of units for their ability to operate over a range of voltages and current conditions (power line testing). The same units remain useful to evaluate color fastness of the enclosure coatings.

Instead of using brand new prototypes for both the power line testing and a separate set of prototypes for the color fastness testing. We could sequence the use of the same samples for both tests. In this case both tests are relatively short and the stresses applied to not interact to alter either test’s results.

Continuing the example, we may suspect the exposure to humidity may alter the power supply’s and enclosure coatings to survive the power line and color fastness testing respectively. Yet, we’re not really sure about the degree of damage humidity aging will impart (e.g. Is it a problem or not).

Therefore, after running the two different tests on units, place the same units in a humidity chamber to evaluate functionality after exposure to high temperature and humidity conditions (a common environmental test), then use the surviving units to evaluate power line and color fastness again.

Any failures that do occur require careful failure analysis to determine next steps to improve the design’s robustness.

Thinking though the effects of each stress and the types of failure mechanisms involved and of interest, you may be able to arrange the use of a reasonable set of prototypes through a sequence of stresses, thus significantly reducing the number of prototypes required for testing. 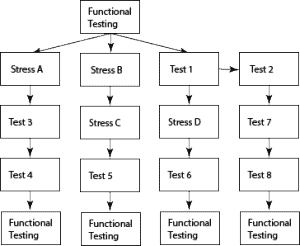 This is Different Than the Product or Software Development Model

The waterfall model is a classical model used in system development life cycle to create a system with a linear and sequential approach. It is termed as waterfall because the model develops systematically from one phase to another in a downward fashion. This model is divided into different phases and the output of one phase is used as the input of the next phase. Every phase has to be completed before the next phase starts and there is no overlapping of the phases.

In the book Rapid Testing by Robert Culbertson, Chris Brown, and Gary Cobb, they define waterfall testing in a similar fashion as the waterfall model description. The authors use image (waterfall model figure) of one step leading to the next step in a flow down pattern.

The waterfall model with the associated test planing and sequencing is a common model for systems and software development. It doesn’t appear to include the detailed application of stresses and evaluations in order to minimize testing time, costs, and complexity.

If the type of environmental testing planning has another name, please let me know, and if there is reference that we should cite. In the meantime, you can take a closer look at your next environmental test plan and possibly puzzle out significant savings.