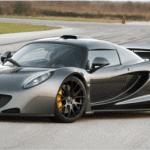 Telematics data analysis can be used to improve our understanding of how people use their vehicles. It is an objective source to validate product requirements. In cars and trucks, sensor signals are read by electronic modules share the data on a CAN bus. Some signals contain data for continuous variables. Some examples of continuous variables are vehicle speed, engine speed, engine torque, ambient temperatures, in-vehicle temperatures, pressures, voltages, and the battery state of charge. Another name for the continuous variables is parametric data. This CAN data is a rich source of information

If the time series of measurements is complete, then engineering may model single or multiple variables to calculate parameters of interest, for example, the cumulative damage on a part. However, since telematics data is intermittent, alternative methods are needed to characterize customer usages.

One approach is to treat the data as a random sample. Numerical analysis can provide the sample average, standard deviation, and data extreme values. This provides information about the central tendency and variance of the data.

Once the average and standard deviation are calculated, it is tempting to make usage projections based on the normal distribution. But, it needs to be verified that the data is normally distributed or if another distribution is better to use. Using the wrong distribution leads to unrealistic projections of the percentiles in the tails of the distribution.

There are several difficulties with the histogram. First, the data is grouped into rather broad measurement intervals. The shape of the histogram can change depending on how the intervals are defined and the quantity of data. A way to get around these limitations is to use probability plots to determine the best-fit distribution.

Consider a relatively small data set of engine speed data collected at 1 reading per second, for a vehicle, identified as VIN1, figure 1: 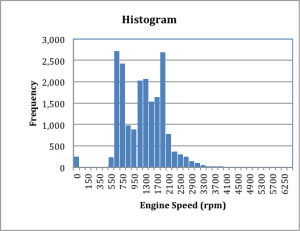 When multiple vehicles are compared, the frequency histogram is becomes more difficult to interpret. Two different vehicles are shown in figure 2. 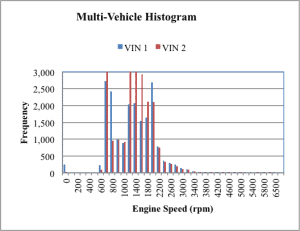 The histograms show the bulk of the engine speed data for both vehicles are between 550 and 3,000 rpm, but it is difficult to determine if the vehicle usage patterns are different. An alternative is to use a cumulative histogram plot to display the data, figure 3. 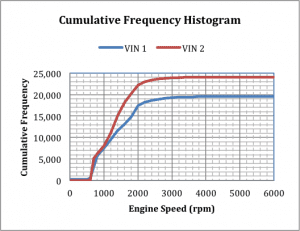 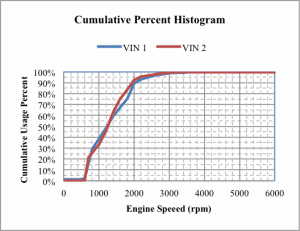 This shows that the two vehicle speed-cumulative usage percentile traces are similar. This approach was extended to a fleet containing 15 vehicles, figure 5. 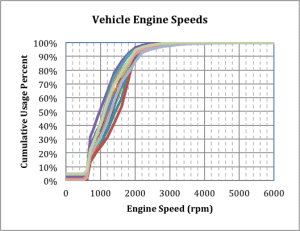 Again, the 15 vehicles usages patterns are similar, but 15 overlaying traces increases the complexity of the graph.

To reduce complexity, the multiple traces are collapsed to a central and high and low extreme percentile traces. Consider the value of the cumulative usage percentiles at 2000 rpm, table 1. 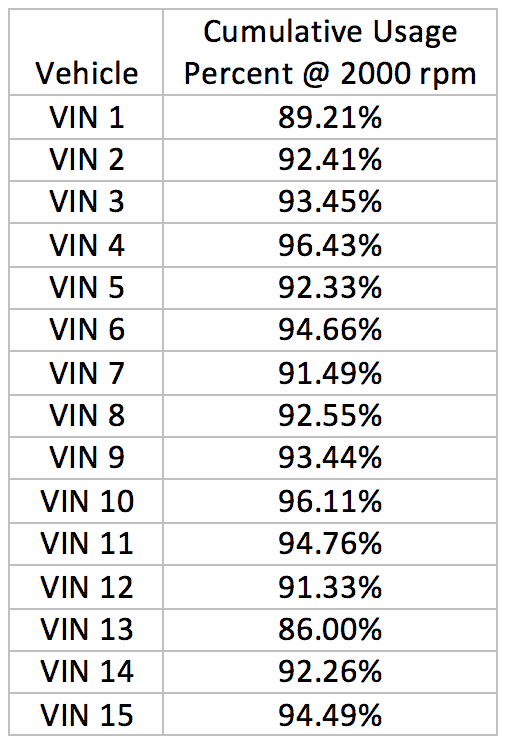 The Kolmogorov-Smirnov normality analysis failed to reject the normality hypothesis for the median ranks engine speeds between 600 rpm and 2500 rpm. So, the percentiles at constant engine speed were assumed to be normally distributed for the remainder of the analysis.

The average and standard deviation were used to calculate the 5th and 95th percentiles. Below 600 rpm and above 2500 rpm, the normal assumption predicted 5thpercentile values below 0% and 95thpercentile values above 100%. These extreme values needed to be truncated to create a reasonable plot.

This process was repeated at each engine speed to collapse the 15 individual traces into P5, Average, and P95 speed traces.  The cumulative percentile plot, for this data, was created, figure 6. 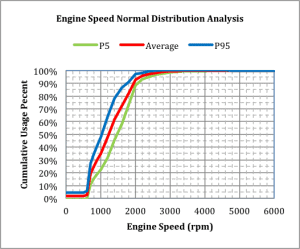 When figure 6 is compared to figure 5, it appears to captures the spread of the speed traces between approximately 600 rpm and perhaps 2500 rpm.

The 5th, 50th, and 95thpopulation percentiles were determined and plotted for each engine speed. For the 15 fleet vehicles, the results were plotted, figure 7. 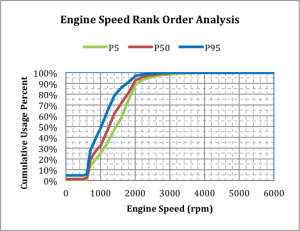 Customer usage and development vehicle test can be compared with this method. If the patterns don’t match, then the development fleet tests may need to be modified to duplicate the customer usage.

Another use is to compare unique customer types. For example, the median traces for police and retail sedans were compared, figure 8. 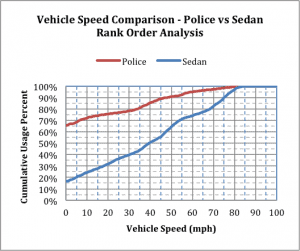 A follow up analysis would analyze the distribution of engine idle times to determine the extreme idle times. The original telematics data was highly intermittent which prevented this analysis. This information would be valuable during vehicle design and development testing, but awaits future data.

When analyzing telematics continuous data for of a fleet of customer vehicles,

Once the usage is quantified, engineering requirements and development tests are updated to assure the product survives customer extreme usage.

If anybody wants to engage me on this or other topics, please contact me. I offer a free hour for the first contact to discuss your problem/concerns and to determine how I can help you.

I have worked in Quality, Reliability, Applied Statistics, and Data Analytics over 30 years in design engineering and manufacturing. In the university, I taught at the graduate level. I provide Minitab seminars to corporate clients, write articles, and have presented and written papers at SAE, ISSAT, and ASQ. I want to assist you.

« The Case of Drones
Characteristic 2 of an RCA Program »