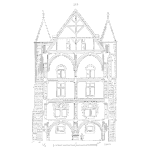 This article covers the conversion of the shaft bearings on a basket centrifuge from oil-bath to grease lubrication.

Oil is a liquid whereas grease is a paste. Grease is oil suspended in a thickener. The oil in grease gradually drains out of its suspension and lubricates by contacting the moving surface. Eventually the oil in grease is depleted and the grease must be replaced. Temperature affects both types of lubricants. High temperatures lower the viscosity, thinning both oil and grease. And low temperatures raise the viscosity making both thicker and less willing to move.

Being a liquid, oil can act as a coolant and can also be cooled in a heat exchanger. This makes it ideal for cooling equipment running at high temperatures.

Because oil removes heat and flows easily to get everywhere, it is used for bearings running at high-speed and in gearboxes. It can also be used on lower speed equipment. When oil is used on low speed shaft bearings it is likely grease can be used to replace it. Greased bearings have the advantage of requiring less on-going maintenance as the oil does not leak out as readily and are easier to re-lubricate.

Shaft roller bearings that are oil lubricated sit in an oil bath to a height half way up the lowest roller as it comes around the race. Those that are grease lubricated are mounted in greased housings with the grease surrounding the lower half of the bearing. To convert from oiled to greased bearings requires changing the bearing’s mounting arrangement.

The machine in Figure 1 is a basket centrifuge running at about 1800 RPM. The in-board and out-board bearings were originally in a common oil bath. In the drawing they are set up for grease lubrication. The in-board bearing is a spherical roller bearing that accommodates both axial and radial forces as well as some vibration. The our-board bearing is a double roller bearing to take radial loads. It floats in the housing to allow for shaft expansion from the heat of operation.

This article covers the conversion of the shaft bearings on a basket centrifuge from oil-bath to grease lubrication.

When designing the conversion, issues regarding clearances and tolerances, running temperature, grease type and quantity, grease port locations as well as shaft-sealing arrangements were addressed.

It was decided to keep the original bearing housings because they were already drilled and made for the machine base. But it would have been just as suitable to use new housings from the bearing manufacturer and modify the machine base to suit. The bearing supplier confirmed that the same bearings used for oil were suited to grease lubrication.

Figure 2 shows the modified in-board bearing seal used to prevent product running back up the shaft and into the bearing housing.

The new shaft seal housing was designed with an internal lip seal and a machined oil flinger outside. An o-ring seal was fitted to press up against the bearing inner race and prevent product entering the housing along the shaft and to stop grease running out along the shaft. The o-ring rubber was compatible with the product and the operating temperature.

When the modified bearing arrangement was first run-up bearing temperatures hit 100oC. This was substantially higher than the 60oC expected. Because of the high running temperature, grease was injected by grease gun every shift. It was not clear why the bearings ran so hot and they failed a few weeks after. The assembly was again rebuilt but the bearings were packed with less grease and automatic grease lube bottles were installed which were set at a slower injection rate than was done previously by hand.

This time temperatures peaked at 84oC and then settled back down to about 62oC during operation. It was clear that we had over-greased the bearings in the original conversion.