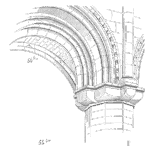 A cooling water tower (CWT) is used to remove heat from incoming hot water and reduce it to a lower temperature. It does that by evaporating off some of the hot water. The evaporated water takes away the heat. Exactly the same process occurs when your body sweets to keep you cool. You cool off even faster if there is a breeze blowing.

There are two types of cooling towers: natural draft and mechanical draft. Natural draft towers are the huge concrete, vapour billowing, flower vase shaped towers usually seen at power stations. Mechanical draft CWT’s use fans to force air through the circulated water. The fan can be at the top of the tower drawing air in (induced) or at the side of the top pushing air in (forced). These are the cooling towers usually used in the chemical process and air conditioning industries and will be the type discussed in this article.

In mechanical draft CWT’s the hot water is piped to the top of the unit and then broken up into droplets by sprays or by falling through perforated (with holes) plates. The falling drops contact upward flowing air and are cooled. To increase the evaporation rate the water runs through packing or ‘fill’ within the tower. The fill looks like corrugated plastic sheets or it can be a collection of splash plates distributed through the middle part of the tower. The fill breaks the water up into smaller droplets and thin streams. The air drafts also flow through the fill. The fill causes the water to remain in contact with the cooling air for longer and maximises the contact time for cooling.

At the bottom of the tower is the sump where the cooled water collects. It is then drawn off by pumps and sent to the process. To reduce the loss of fine droplets blowing out of the tower (carry-over) another set of plates or fill is often used at the top of the tower as drift eliminators. Figure 1 shows two typical arrangements of mechanical draft CWT’s.

A CWT must be adequately sized if it is to provide sufficient cool water for the process. The air passing through the tower must cool the water low enough for it to be reused. The cooling effectiveness depends on several factors. The most important are:

The majority of cooling in a CWT is done by the rejection of heat through the creation of water vapour. A lesser amount of cooling occurs by direct contact of cool air with the water.

Evaporation requires the transfer of energy from the warmer water to the cooler air until all is at equilibrium. The energy in the water is removed by converting the liquid to vapour. The vapour is a higher energy state than the liquid and to get to the higher state it robs the heat energy in the liquid and cools it down by doing so. This energy taken from the liquid to convert it to vapour is known as the Latent Heat of Vapourisation. The vapour goes into the surrounding air making it warmer and more humid (wet).

The drop cannot remain hotter than its surroundings without a supply of energy. When the drop and air first make contact the two temperatures start to equalise. The water starts to cool and release vapour and the air warm and become more humid. But the rate, or speed, at which cooling first occurs is slow as the difference in temperatures and humidity is not great because the air is already warm and wet.

Lower down in the tower the falling drop hits the fill arrangement and breaks into smaller droplets. The droplets collect into broken, turbulent streamlets running down throughout the fill. The water now contacts cooler air lower down in the tower. This air is dryer, not having passed over much water. The cooler, dryer air removes the heat in the water at a faster rate than at the top of the tower because the difference in temperatures and humidity are much greater.

Finally the fine, thin streamlets fall out the bottom of the fill into the sump where the only cooling that occurs is from the surface of the water pool as air is drawn across it.

Choosing the position to locate a cooling tower requires knowledge of its local environment. The direction of the prevailing winds will determine where the vapour plume is blown. Whether the ground immediately around the tower is sealed or uncovered will affect dust loading in the tower.

The nearness of buildings influences the passage of air to the CWT and the movement of the plume. It is critical that recirculation of the plume back through the tower is minimised. If the moist vapour plume continually contacts metal in buildings they will rust at an accelerated rate. The chemicals stored or used in the vicinity must be known. Chemical vapours drawn into the tower, such as hydrochloric acid or car exhaust fumes, attack it. The nearness to places of work and the amount of exposure people may have to the plume requires consideration.

Bacteria and algae grow in the CWT’s warm waters and wet crevices. Legionnaire Disease is the most famous illness that is associated with CWT’s but there numerous different bacteria that have been found in CWT’s. Cleanliness standards and procedures have been developed by health organisations for the care of cooling towers and tower owners and users are obliged to meet these requirements.

Typically a standard requires bacteria counts per volume of water to be less than a maximum number. The control of bacteria levels is usually done by the use of chemical biocides dosed into the tower. The biocides can be slug dosed or metered in by pump. The standard also specifies water cleanliness and requires towers to be emptied and cleaned when dirt loads become excessive. A water bleed- off point is used to control the amount of dissolved solids build-up in the tower. In-line filters can also be installed in the piping circuit to keep the water clean for longer.

Entry into a cooling tower constitutes a confined space entry and appropriate training and procedures need to be in place.