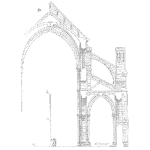 Not everything within some systems benefits by being fault tolerant.

For example, a failure of a cabin reading light over a passenger seat is not critical to the safe operation of the aircraft, thus is likely not created to be fault tolerant. One criterion to determine what should be fault tolerant is the criticality of the function the system provides.

This also applies to specific subsystems within a system allowing some elements to be created fault tolerant and others within the system not.

How to Determine What to Should be Fault Tolerant

Besides considering the function, the elements (components) of a system each contribute to the overall functional performance.

Evaluating each element using a few questions may help determine the specific elements that may benefit with fault tolerance.

How likely is the component to fail?

This becomes a tradeoff considering the added complexity of a fault tolerant design versus the need to employ the alternate means to provide the function if an element fails. Complexity, weight, and cost are just a few of the factors to consider. If an element is very unlikely to fail, the effort to create a fault tolerant system may be wasting resources better used to improve other elements of the system.

Some systems fault tolerance is obvious, such as 911 emergency services phone systems, some banking and commerce system, safety critical systems of aircraft, public transit, or chemical plants. And sometimes the decision to add some level of fault tolerance is not so clear and requires careful consideration of the costs, benefits, and criticality.