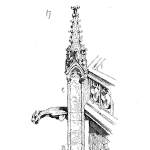 He and others have explored other materials used as conductors prone to electromigration. Thus, there are a number of models and constants available to match your particular system.

Let’s take a look at the general equation for a microcircuit conductor after a brief description of the failure mechanisms called electromigration.

James Black in conference presentation and paper describes electromigration as:

… the transport of ions through a conductor resulting from the passage of direct current. It is caused by a modification of self diffusion from a random process to a directional one by the presence of an electric field and charge carrier flow.

This directional effect causes ions to migrate or diffuse downstream in terms of electron wind direction and vacancies move upstream.

The effect is a thinning of the conductor in some areas and thickening in others. Eventually, the conductor thins to a point that it is unable to carry the current and fails.

The formula James Black is named for is:

tf is time to failure
A is a constant related to the conductor geometry
J is current density
n is a parameter related to current density accounting for current flow effects other than Joule heating (2 in Black’s original paper)
Ea is the activation energy (0.48 eV in Black’s original paper and later reported as 0.5 eV.)
k is Boltzmann’s constant (8.617 × 10-5 eV/K)
T is the reaction temperature in Kelvin, K.

Both n and Ea vary depending on the conductor material, size, and other factors. If using technology similar to what Black studies in the 1960’s and 70’s then the value of n and Ea here may be appropriate for your situation. If not, look for suitable parameter values or devise an experiment to estimate the parameters.

An Acceleration Factor and Example

To estimate the acceleration factor from test to use conditions, create a ratio of Black’s equation for the use over the test conditions.

Where the subscripts, u and t represent use and test conditions, respectively.

For a quick example, let’s say we have a device using aluminum conductors and we would like to evaluate the expected number of electromigration failures that may occur over a 5-year span of 24/7 use.

You can run the numbers and, if I did the calculations correctly, should get an acceleration factor of about 7.87.

Since there are 43,800 hours in 5 years of full-time operation, we would need to test under accelerated conditions for at least 5,566 (rounding up to nearest hour) to replicate the stress experienced as if operated for 5 years.

This is a classic formula and a simple example of it’s use. If you have current models for electromigration for modern conductors within microcircuits, please leave a comment pointing to the resources and models.
As silicon devices continue to get smaller there is bound to be additional work and modeling of this failure mechanism.

« The 5 Worst Inventions Ever!
Fibreglass Construction and Repair »