One of the curses of Reliability Centered Maintenance and Root Cause Analysis is a great Facilitator makes the process look easy. So easy in fact that after watching a good facilitator lead one event we’d like to believe we could jump right up and facilitate the next one with no training or assistance. In Mentoring RCM Blitz™ facilitators during the certification process we work to perfect 2 dozen skills with the hope of turning out great facilitators. The skill we typically spend the most time working on is writing failure modes.

While there are many places that new RCM facilitators struggle when it comes to facilitating a thorough and useful RCM analysis, most errors in the process start at the failure mode level. Writing good failure modes requires an expert level of understanding of hundreds of different of components. What is the component intended to do (Function) and what are the ways that this component can functionally fail (Failure Modes).

Over the past 20 years I have tried a couple of different ways to teach how to write good failure modes. In performing hundreds of RCM Blitz™ analyses with different facilitators, and practitioners for companies around the world we have come to understand that good failure modes should be written in three parts.

As an example: Cooling water pump bearing (Part) seizes (Problem) due to lack of lubrication (Specific Cause of Failure) 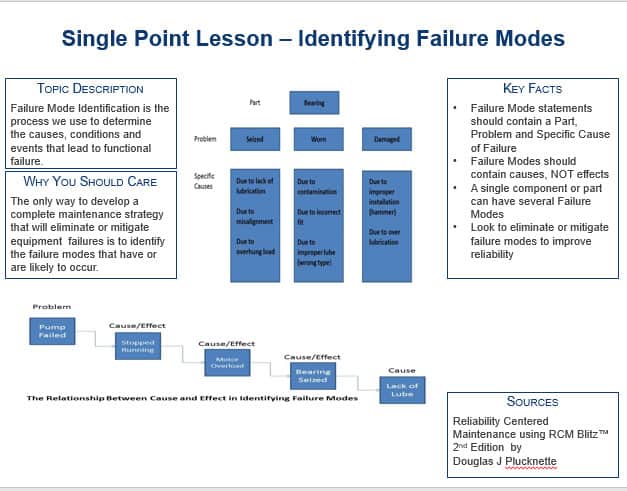 The problem portion of the three-part failure mode is the undesired condition that results from specific cause of failure. If we neglect to lubricate the cooling pump bearing it will vibrate, heat up and eventually seize. While the bearing has been failing for some time when it seizes we now have a problem.

So, what exactly is a specific cause of failure? This is where experience in Root Cause Analysis or Cause Mapping becomes extremely valuable. Failure Modes are all about understanding the relationship between cause and effect. The trick is to learn to discuss each failure mode at a level where a sound maintenance task can mitigate or eliminate the failure mode. To understand this let’s go back to the cooling water pump.

Cooling Tower Pump Bearing Fails – Again, just two parts here, there is not enough information here to make a sound task decision. Some would say that we could perform vibration analysis and detect the bearing failure. While in most cases this might be true, without knowing the specific cause we cannot be sure. In many cases, there are specific causes of failure where vibration analysis is clearly not the best task for mitigating the failure mode. As an example, I don’t want to use vibration analysis to tell me that we have not lubricated a bearing.

Remember, the failure modes we identify are the key to developing our complete maintenance strategy and most important failure modes to identify the failures that result from the context and environment in which we operate our equipment.

In closing, I would love to hear your comments regarding failure modes.  Did this article help you to better understand the process of identifying good failure modes? Have you ever completely missed a failure modes that resulted in the failure reoccurring several times before it was properly identified?

Doug Plucknette, Principal & World-Wide RCM Discipline Leader at Allied Reliability Group is a Reliability Engineering Consultant and Published Author of “Reliability Centered Maintenance using RCM Blitz™ and Clean, Green and Reliable. Having created the RCM Blitz™ Methodology he has been an RCM Practitioner and Trainer for over 20 years. Doug resides in Spencerport, NY and can be reached at plucknetted@alliedreliability.com