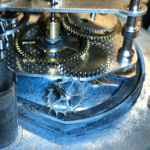 The clock in my ’79 Porsche 911 works perfectly. I don’t remember the last time I set it.  Maybe I made a small adjustment six months ago, a year ago, don’t know?  A modern day quartz clock does this no problem, a mechanical spring clock might struggle in such a rough environment.  So was it quartz or mechanical? the ’70s was when quartz came on the scene, so either was a possibility. First I wanted to find out if it was ever replaced or serviced. So what did I do?  I contacted the previous two owners.  One purchased it new in ’79 and the other owned it for a five year period before I bought it. Neither recalls it ever being serviced or having a problem.

I love mechanical clocks and watches. They are just the most amazing mechanisms, even the history is fascinating.  If you are curious read “Longitude” by Dava Sobel.  I have my own little mechanical watch restoration setup in my workshop.  We are talking microscope, small camera with magnifying lens so I can video the disassembly and play it backwards as an assembly video, ultrasonic cleaner, and $26 individual jeweler screwdrivers which are maintained with a special sharpener. Well I recently got the chance to answer the question about my dash clock. Recently a friend of mine asked me to take a look at the one out of his ’73 911 which had stopped working. Of course I would!  I pulled it apart to find the only thing wrong with it was a broken solder connection.  The only electronic portion of it was a solenoid that wound the main spring every half minute or so. This was basically the same function as an individual winding the crown on a wrist watch.  Other than that it was a classic watch movement design, simple and elegant.  It did have dirt in it and all the oil had evaporated and dried out back when Motley Crew held the #1 spot on top 40.  But it ran perfectly nonetheless.  It was a great opportunity to study the design and try to understand why it was so amazing.  It came down to this

I’ve also noticed the clocks are in the dash in many of the old racing pictures and videos for 911’s.  I bet anytime one failed they had an engineer figure out why. Porsche never forgot the real objective of auto racing, “Public reliability testing for continuous improvement.”