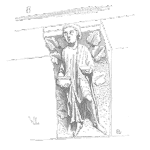 The Eyring Model for Accelerated Testing

Sometimes the reaction rate of a process relies on two stresses. For chemical reactions temperature seems to influence the rate of the reaction. Yet, other stresses such as humidity or voltage may also play a significant role.

H. Eyring suggested a model that assumes the contribution of each stress on the reaction rate is independent thus one could multiple the respective stress contributions to the rate of reaction.

The Erying model provides a means to account for the contributions of temperature and another stress when modeling the time to failure of select failure mechanisms.

The model includes the Arrhenisus model for the temperature contribution, and an inverse power law term for another stress.

The general form of the model is:

S is the applied stress

Note the stress, S, may be transformed any number of ways such as inverse, squared, or square root.

A generalized form of the model include an interaction term to account for any interaction between temperature and the additional stress.

C is another constant

D is a constant and represented the interaction term

Four Uses of the Erying Model

Black modeled electromigration in aluminum conductors in VLSI and other microelectronics using temperature and current density.

Zhurkov modeled the time to rupture of solids using temperature and tensile stress.

« Digital Circuits and the Stuck at Fault Model
Are You Managing Risk or is it Managing You? »