Nobody likes to fail. Failing causes us embarrassment. Failing bruises our ego. Failing might be a dark spot on our performance assessments. All we have to do is reflect on our childhood for when we failed and how poorly we felt. Even if our parents did give us encouragement, we still felt bad about failing. Let’s face it – failing sucks.

In most countries, if you fail at business, you carry the stigma of that failure with you for a long time – perhaps forever. The Economist did a great article entitled “European entrepreneurs; Les misérables” in June of 2012.

If your business fails in France, it can 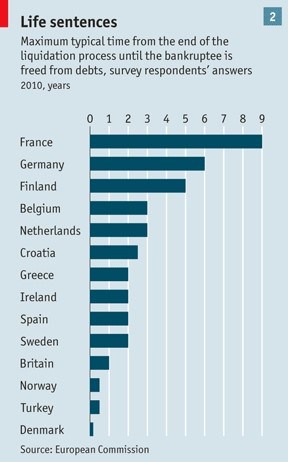 take up to nine years before an entrepreneur can start anew – and it’s ironic that entrepreneur is a French word.  At six years, Germany is not much better.  In some instances, you can be banned from ever owning a company again.

Compare that with the United States, where failing in business is seen as gaining wisdom – paying tuition at the University of Life – or a company the size of General Motors that can wind its way through bankruptcy reorganization in close to thirty days.

In addition to failing, most business start-ups in Europe are forced to remain small in due to a lack of access to capital (in both the number of avenues and the amount of funding available).  In the States, you can seek money from banks (sometimes at steep rates), but there are also many avenues for funding from private sources including from; 3F’s (Family, Friends, and Fools), Angel Investors, Venture Capital, and Private Equity.

Over the past several years, a constant procession of successful entrepreneurs and business people have been pontificating about the virtues of failure, as if it is something that is to be sought-after and cherished when achieved.

“That which does not kill me makes me stronger.” – Friedrich Nietzsche

At the beginning of your journey, you have not yet invested, therefor there is no risk, and the anticipated reward is at apogee.  But once you start your journey, the investment starts to flow and the risk increases.  If there are no surprises, you will reach your destination and realize the rewards for which you had planned.  But as we all know, there are always surprises.

Over time, the rewards that were forecast might change for a variety of reasons.

On the revenue side, maybe a competitor beat you to delivery.  Or maybe your intended market was not as vibrant as you anticipated – or didn’t exist at all.  Think about the hype that preceded the Segway – the transportation device that was going to change the world – versus the reality.

On the investment side, maybe a key piece of technology couldn’t be created, or the cost to create exceeded the threshold for pain.  Maybe there were intellectual property or supplier sourcing issues.  Perhaps there were government regulation challenges.  Maybe a key “brain” on the project decided to go elsewhere.  Consider the saga of Tucker Motors, which created an automobile so advanced for its time that the weight of competitors with the government forced it out of business.

Even if everything worked well, the market existed as you anticipated and you were able to develop the deliverable on budget – perhaps you will have difficulties with delivery and your intended customer base will be at risk.  Need look no further than the challenges facing Samsung and the fatal problems with the Note7 to witness an example of this.

Large companies can afford to take more and larger risks because they can spread failure over a larger pool of effort.  Even so and with all of the competing programs vying for attention and support, the larger company will not indulge an appreciable amount of risk or accept a degree of failure that is beyond their comfort level.

Consider Thomas Edison.  The story goes that failed over 1,000 times while trying to create a lightbulb which was commercially viable (worked reliably and able to be manufactured at an affordable cost) before he was successful.  Edison went on to found the Edison Electric Light Company, which became General Electric.  Do you think the General Electric of today would allow a program to continue if it had over 1,000 failures?  Today, General Electric buys more innovation – in the form of acquiring companies with promising offerings – than it creates.

We often hear about deals being done in the world of Private Equity, where investments from a Private Equity fund is investing in a company.  When Private Equity invests in a company, the commitment might be some stated amount, but the disbursement of these funds (often referred to as “tranches”) is dependent upon the company achieving specific milestones.  In this way, the investor has the ability to manage their risk.

These deals are different than the deals you might hear about where one company is acquiring another.  In a straight-up acquisition, the acquiring company will transfer value (usually in cash and/or stock) for the ownership of a company (either a portion of the company or in its entirety).

The average entrepreneur does not have the luxury of big companies, and the vast majority do not get any special investment financing beyond their credit cards and 3F’s.  They most likely do not have multiple innovations in the pipeline – but are focusing on making one offering (whether a business, or invention) successful.

I offer the following graphic to illustrate the business dynamics of risk and reward in the mind of the average entrepreneur. 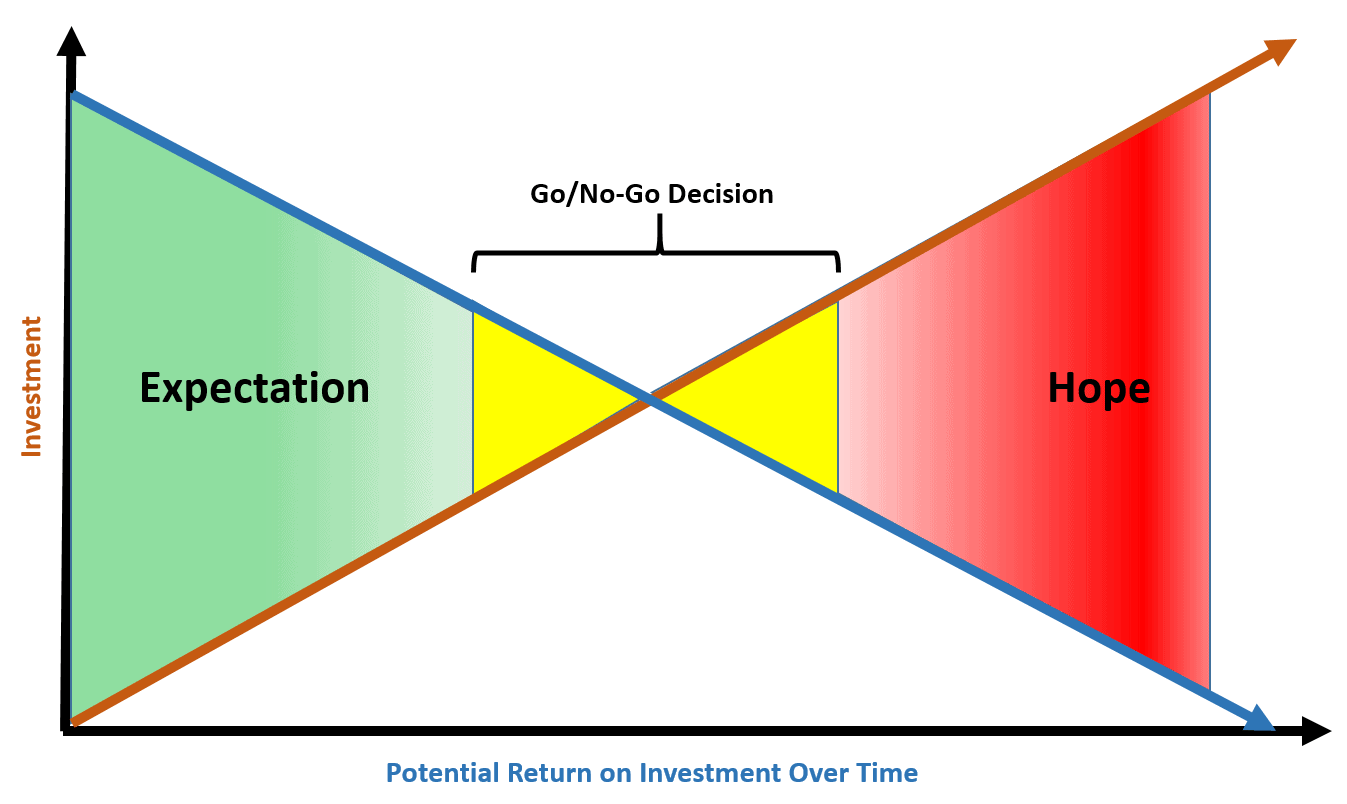 For the average entrepreneur, time is not on their side.  They have to develop and bring to market their offering before they run out of resources.  Accordingly, they have to accelerate their decision making processes – often making them from imperfect data – and they have to be able to recognize wrong-turns and take corrective action quickly.  And entrepreneur will become well versed in Murphy’s Law – whatever can go wrong will go wrong.  This will condition the entrepreneur so that they will believe this is the natural state.

“Pride goeth before destruction, and a haughty spirit before a fall.” – Proverbs 16:18

If you are a first-time entrepreneur or innovator;  You are likely to be strong-headed.  You have your passion and your vision and you are going to pursue it in as linear a path as possible.  Perhaps you have some funding; savings or small investors.  You might have some mentors to help guide you.  They may or may not have relevant experience and it is less likely that they understand your vision.  If you are fortunate, they have bona-fide wisdom to share.

Maybe you are successful and your new venture or product survives five years.  Super.  Congratulations are in order.  You are in the five-percent.

If you are in the other 95% and are not successful, you almost certainly continued investing in your business or innovation even as you knew you were approaching, and going into, the range of the go/no-go decision – and you probably continued investing beyond.  The thought of failure and your ego kept you from quitting until you were well into the red-zone, where hope overcomes reality and pragmatism.

And hope is dope.

Of course, there are stories of people who went well beyond what a reasonable person would do until they realized success.  But these people and their outcomes are very rare.

“Experience is the toughest teacher because she gives the test first, the lesson afterward.” – Vernon Law

If you are a repeat entrepreneur or innovator;  You are very likely more wise and less ideological – and your passion has been tempered by pragmatism.  You don’t think in a linear fashion with only the outcome in mind.  You recognize that there are a near infinite number of iterative steps that must be taken before your ultimate goal is realized.  And you also understand that the ultimate goal might not look precisely as you envisioned at the start.

As such, you measure progress incrementally.  Like a person on a journey, you have a vision of your final destination, but the journey itself has an untold number of waypoints which afford the necessary opportunity to reflect, assess, and make any necessary adjustments.

There will be times you fail on your journey.  But the result in this more deliberate approach is that your successes, and failures, will be smaller.  Your successes will provide progress towards your objectives.  Your failures will be less painful and offer the opportunity to gain wisdom.

After all, failure is not the end-goal, succeeding is.

So fail fast, fail small, learn, and move on.