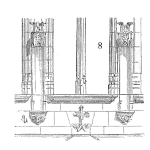 Author’s Note: I want to reiterate that this Series about reading the basic fracture surfaces, is for novices who often come into contact with such failed components. This Series is about the basics (101), and is intended to give readers an appreciation for the value of such ‘broken’ parts to an effective investigation/RCA. While this information will be rudimentary to seasoned materials engineers, I know they will all appreciate heightening awareness to the need to retain such failed parts for analysis, versus throwing them away and just replacing the part. Throwing away failed parts is a recipe for a repeat failure, when one does not understand why the part failed in the first place.

Let’s focus on Fatigue, since fatigue is the most common fracture pattern in about 90% of the cases.

This graphic (Figure 1) demonstrates a classic case of fatigue.

Repeated cyclical loading will surface in a variety of forms. Here are a few such applications in Figure 2:

Now let’s look at some examples from various environments:

Let’s take a quick look at where stress concentrations are most prominent on various components.

While we showed this fracture surface before, in NAME THAT FAILURE (3), it again becomes relevant here.

This will wrap up our Fatigue 101 discussion and I will leave you with a teaser for Part III-Overload, what type of overload pattern do you think this is?

As always, if you interested in learning more about these basics please visit www.reliability.com, or simply click on the graphic below for workshops that specialize in preserving and analyzing such evidence.