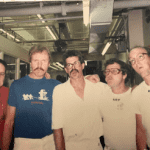 I’ve always considered myself to be somewhat lucky in life. I survived being hit head on by a car when I was five years old. I grew up in a small town in Upstate NY that had little to do in the form of entertainment but a lot to offer those in search of a sound middle class life. While I still live in that same town it has transformed from a farming community to a suburb of Rochester. I have raised my children in this same town my parents and grandparents called home and my grandchildren are being raised here as well. While life is good in our Village whose slogan is “Someplace Special” the opportunities available to my generation aren’t what they used to be. Today, it’s tough to be lucky.

When I look back, I don’t have to think too hard to know why life turned out so good. I learned a trade.
Becoming a Pipefitter at Eastman Kodak wasn’t my first choice in life. But, like I said before, I’ve been somewhat lucky in life.

The Apprenticeship I started at Kodak came about after the State University of New York at Geneseo threw me out on my back side after a not so stellar first year of college. While I was now officially looking for a job, I had found luck at SUNY Geneseo. It’s where I met my wife of 36 years and on the day I asked her to marry me, I had no job and no future plans for a career.

As luck would have it, I got hired by Kodak as a summer employee and during that summer I worked with Kodak’s construction Pipefitters. In that summer alone, I learned how to solder and braze copper piping installing new air, water and refrigeration lines under the supervision of two skilled and patient Journeymen. By the end of that summer, I had a plan for a career.

The day after the summer job ended, I put in my application for the next year’s Apprentice Program and three months later I was invited to take the two part test Kodak used to evaluate potential Apprentices. In February of 1981 I was hired into Building 317’s Polymer Department.

I worked 19 years at Eastman Kodak, 12 years as a Skilled Tradesperson. I can tell you on the day I was hired I knew my life would change. I can remember telling my wife that Kodak was a place you could work your entire life. I had no idea that day how much learning a trade would change my life.

I have started this series of articles about the people I have known all my life and friends I have met along the way who were smart enough to say yes to working in the skilled trades. I want the next generation of potential Skilled Trades workers to understand that learning a trade can change your life.

I’d like to share with my readers the real life stories of success as told by my friends. When did they first learn their trade? Who were their mentors? Did they have any struggles they had to overcome? Most of all I want people to know how learning a Trade changed their lives.

As usual, I would like to thank you all for reading and I do look forward to receiving and reading your comments.  If you know someone who would be a great subject for this series, please pass their name along!

Douglas Plucknette, owner and President of Reliability Solutions, Inc. is the creator of RCM Blitz™, the author of Reliability Centered Maintenance using RCM Blitz™ and Clean, Green and Reliable a best-selling book on how to reduce energy consumption in manufacturing plants through equipment reliability. Doug has published over 100 articles on Maintenance and Reliability, and has been a featured Speaker as well as Keynote Speaker at a countless number of conferences around the world.