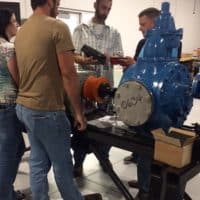 Thirty-three years ago, I graduated as a Journeymen Pipefitter from a three-year skilled trades apprentice program and went to work as a Journeymen at Eastman Kodak. At that time in my life I had no idea where this training would take me. I was simply honored to work alongside those who in mentoring me, passed on a set of skills that would last a lifetime.

To say the training and skills I learned in this program changed my life would be an understatement. In the coming years, I would attend and help to develop Reliability Engineering Certificate program sponsored by Eastman Kodak at RIT (Rochester Institute of Technology) where I went on to develop RCM Blitz™ a Reliability Centered Maintenance methodology focused on developing a complete maintenance strategy for critical assets. From 1997 until today I have been working as a Reliability Engineering consultant providing trading and analysis for companies around the world.

Over the past twenty years however I have become increasingly concerned having witnessed the demise of formal skilled trades apprentice programs. Having worked with nearly 100 large companies I can list only a 8 who still sponsor a formal program to train their tradespeople. As someone who has worked in the Maintenance and Reliability world my entire career I can say with confidence the lack of the precision maintenance skills one would learn in a formal program are not only evident, they are having a devastating and costly effect on manufacturing equipment reliability. The result for companies who believe they can get by without a formal program is a workforce who have overtime become a group reactive component replacers. Simply put, if your tradespeople lack the skills to perform precision maintenance, they also lack the skills to effectively troubleshoot, determine the cause of failures and determine strategies based on sound practices that will eliminate future failures.

This brings me to the impressive subject of this article. I recently had the pleasure of instructing a RCM Blitz™ facilitator training program for Mosaic at the Polk State College in Bartow Florida. Expecting nothing more than instructing a group of Engineers on the RCM Blitz process I was immediately surprised upon entering the facility to find several classrooms full of hands on state of the art skilled trades training equipment. Seeing this I immediately began asking questions about the College and Mosaic’s use of the facility. In this same week Mosaic had a precision maintenance certification class for a dozen or more of its skilled tradespeople.  To say I was encouraged to see people performing hands on training on precision alignment starting with reverse dial indication and moving on to laser alignment would be an understatement. Noticing my excitement, I was then offered a tour of the facility where I could take some pictures of what a commitment to precision looks like. Pipe stress simulation, vertical and horizontal rotating assets, a complete chemical process equipment lab complete with working pumps, motors, VFD’s, Flow Meters, Instruments, Process Controllers, Electrical Panels, Piping and Tanks. This incredible training facility will no doubt provide a return on investment as their workforce is exposed to and learns how to perform maintenance the right way.

In a way that could only be described as the icing on the cake, on Thursday afternoon I noticed a formal event being set up in the facilities large theater and when I asked what the special event was I was thrilled to find out it was this year’s Apprentice Graduation ceremony. Prior to the ceremony, I was honored to meet one of Mosaic’s Vice-Presidents who by coincidence is also a Pipefitter Apprentice Graduate, along with the College’s Program Director. Each described their commitment to the program as well as their participation in National Committees where tax dollars are now being dedicated to start programs for training thousands of skilled tradespeople across the United States.

The time has come to again educate future generations of skilled tradespeople and to as parents, Aunts, Uncles, friends or mentors to encourage our youth to consider the trades as a profession that can not only last a lifetime but provide a jump start to countless opportunities.

Hat’s off to Mosaic and Polk State College for recognizing the need to train and educate the workforce of the future. More important, congratulations to the graduates of this year’s Apprentice Program. The skills you have learned and will continue to acquire as you work in the trades will be of great value throughout your life and can serve as launching pad for a career that has unlimited opportunity.

I would like to thank Malcom Osenton, Sr. Manager of Asset Integrity at Mosaic for taking the time to introduce me to this outstanding facility and to those who have taken the time organize and sponsor the program!

« The Value of Balance
Effect of Process Changes on Electric Motors »