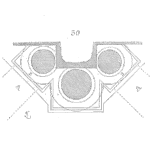 This is an alternative test to using the Kendall-Mann Reverse Arrangement Test.

Use the arrival times of failures (not time between arrivals or inter-arrival times) for the analysis. Let’s say we have data from a system with the following data:

We are assuming the repair time is insignificant and the failures are independent of each other.

If we doing the analysis as the last failure occurs, in this case, 197 days, we should ignore the last failure and reduce the number of failures, n, by one. In this n = 5. If the system is repaired and continues to run for some period, then use all the failure data and set time, T, to the length of the observation. So, if the system operated an additional 23 days, we would set T = 197 + 23 = 220 days.

For an HPP behaving system, the failure times are the order statistics of a sample from a uniform distribution [0, T]. The mean is thus the mean of n independent uniform random variables. This sample then would, according to the central limit theorem, converge to a mean of T/2 and variance of T2/(12n).

This test is similar to a hypothesis test, with the null hypothesis that the system is from an HPP. The alternative hypothesis options include:

In the example we’ve started, let’s consider we want to know if the data shows an improving situation. This is a lower tail test and we can use the normal distribution, z – table to determine the critical value.

From the data we calculate the z-value considering the sum of the arrival times is nearly normal with mean nT/2 and variance of nT2/(12n), thus

The calculated value from the data is not beyond the critical value or less than the -1.645, thus we do not have convincing information to prevent us from considering the system follows an HPP or has a relatively constant arrival rate of failures.