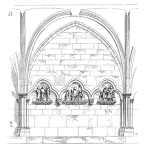 Preservation and repair are as old as sailing, but a written record of how this was managed has not always survived. One failure mechanism that has affected wooden vessels for centuries is shipworm – a mollusc that drills deep holes into the hull.

Shipworm was common in the Mediterranean, so there is a long record of means to combat it. A shipwreck in Kyrenia has been dated to somewhere between 384 BC – 288 BC. The hull was covered with hammered lead sheathing to protect it from shipworm. Archaeological examination concluded that over its lifetime, the ship had received four major repairs, and in-service modification. The Kyrenia ship first sailed with no sheathing, but wooden sheathing was added. Later, lead sheathing was used. (Steffy p. 95)  Archeologists have also observed the use of oche on ship hulls in the Mediterranean and debate if the purpose was preservation of the hull. Several Greek and Roman ships with lead sheathing have been studied. By 1514, Spain was using lead sheathing. An Englishman who had served the Spanish crown sheathed a small English squadron with lead sheathing in 1553. (Wilkinson p. 132)  In 1624, Monson wrote in Monson’s Tracts that the Spanish and Portuguese used lead sheathing, but that it was “not durable” so not in use in England.

The Dutch East India Company was established in 1602 to manage trade with Asia.  The company required a specific lead sheathing system in all their shipbuilding contracts for the first four years of operation. Archaeologist Wendy van Duivenvoorde compared ship construction contracts along with excavated shipwrecks to document sheathing practices. By 1606 the Dutch East India Company stopped requiring lead sheathing in their construction specifications and specified double layers of oak sheathing. Van Duivenvoorde did not find a recorded reason, but speculated that cost, maintenance, corrosion, or ship stability were factors.

Milled lead was patented in England in 1670. Milled lead had a more consistent thickness and was cheaper than hammered lead. The Milled Lead Company claimed that hull cleaning every few months was no longer needed, which would save the expense of £40 a year for a 600-ton merchant ship. Lead could be recycled at the end of ship life and kept oakum from rotting. The new method of manufacturing lead sheets changed the optimization that Monson had described about why wood sheathing was the best design choice for the English navy.

In 1673, King Charles II personally inspected the lead-sheathed bottom of the Phoenix after it completed two trips to the Straits of Magellan. The results were good, and the king ordered lead sheathing for the whole fleet. The Royal Navy sheathed 20 ships to test the practicality of this method of reducing the attack of shipworm. This was a structured experiment intended to reduce the maintenance requirements of the fleet.

The navy awarded a 20-year contract for the Milled Lead Company. Within two years, the navy’s senior administrator, Samuel Pepys, was writing letters about mysterious iron wastage that only occurred on lead-sheathed ships. (Hodges p. 79) The lead sheathing caused galvanic corrosion of iron components, accelerating their decay. There was no hope of the Royal Navy understanding the problem because scientific discovery of the galvanic series was still a century away.

Thousands of iron bolts were used in the hull to strengthen wooden joints. Iron bolts and chains were also used to construct the rudder. In 1677, the HMS Plymouth was declared unsafe for sea due to corrosion of rudder iron. In 1678, the HMS Dreadnought followed suit. (Wilkinson, 1841. In 1842, the Institute of Civil Engineers awarded Wilkinson a silver Telford medal for his historical review of sheathing systems.)

The navy investigated the problem by conducting frequent periodic inspections of iron components on HMS Dreadnought, HMS Lyon, and HMS James Gally. Selecting three specific ships and following their degradation over several years allowed the navy to compare variables. The was also a long-term technical investigation to eliminate unknowns…a root cause investigation.

In 1682, an order was issued to investigate the damage to iron due to lead sheathing. As part of the investigation, Mr. Betts, the master building in Portsmouth, recommended that the lead sheathing be stripped every 7 years to replace the caulking. The government sheathed a ship in lead and put it in storage as an experiment, and later found that the rudder iron had still decayed. (Wilkinson 1841)

Other companies stepped in. By 1693, patented lead alloys promised to solve the problems with pure lead. In an 1841 history, Wilkinson reported that none of them were effective. By 1700, the English navy stopped using lead and reverted to the traditional wood sheathing that Monson’s Tracts held was the most practical and cost effective system.

The episode with lead sheathing showed that the English navy was capable of identifying a method to reduce maintenance requirements. The English navy had managed an investment program that was intended to extend hull lifetimes and reduce the frequency of wood sheathing replacement. The navy conducted two long-term experiments to assess if the sheathing was practical and effective, and committed large sums of money to the program. When a new failure mode was identified, the Navy conducted a structured investigation. They also managed to reverse course and re-adopt the previous wood sheathing system.

Almost a century later, metallurgy progressed to allow the use of copper sheathing. The Navy repeated the program to switch to a  metal sheathing. The mysterious iron corrosion also returned, so the Royal Navy investigated again. Armed with the scientific intellects of Sir Humphrey Davy and Michael Faraday, the results would change the history of science.

van Duivenvoorde, Wendy “The Use of Copper and Lead Sheathing in VOC Shipbuilding” The International Journal of Nautical Archaeology (2015) 00.00: 1–13

Wilkinson, J. J. “An historical account of Wood Sheathing for Ships” and “On lead sheathing for ships” Minutes of Proceedings of the Institute of Civil Engineers, Session 1841, XX, pg 98 and 132

« Preventing Pipeline Ruptures
What Reliability Engineers Can Learn from Quality »