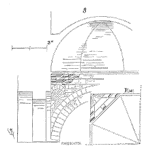 This article explains the metal corrosion process including the basic chemistry of how metal loss occurs. Methods to control corrosion are also listed and explained.

Corrosion in a wet environment attacks the metal by removing the atoms on the metal surface. The metal atoms at the surface lose electrons and become actively charged ions, which leave the metal and enter the ‘wet’ electrolyte. The metal ions join with oppositely charged ions from another chemical and form a new, stable compound.

Corrosion requires energy. During corrosion the reacting components go from a higher to a lower energy state and release the energy needed for the reaction. In the dry corrosion process of Figure 1 the metal and the oxygen combine to produce the oxide on the surface because the reaction leads to a compound (oxide) at a lower energy level.

The oxide layer shields the metal from the oxygen and forms a barrier. The oxide will not react with the oxygen in the air or the metal. The barrier makes it difficult for oxygen in the air to contact the metal and it eventually grows so thick that the movement of electrons and ions across it stop. Provided the oxide layer does not crack, or is not removed, the metal is protected from further corrosion. But if the bare metal is exposed to the oxygen it will again react to form the oxide. In this case the presence of oxygen benefits the metal’s protection. Removal of the oxygen removes the metal’s ability to create its own protective corrosion barrier.

In the wet corrosion process of Figure 1 the electrons from the corroding anode metal move to the connected cathode where they recombine with the atoms of oxygen and water in the electrolyte to make a new hydroxyl ion (OH-). This new negatively charged ion then reacts to make a stable compound with the positively charged metal ions (M++) that originally lost the electrons. In this case the electrons have a continuous pathway to escape the parent metal and the parent metal, which cannot develop a protective barrier, disassociates or falls apart. Once corrosion starts it continues until the ingredients are all used up.

The electrolyte in wet corrosion can be neutral, acidic or alkaline. For corrosion in near neutral solutions (pH 6 – 8) under oxygenated conditions the predominant cathodic reaction is the oxygen absorption reaction (O2 + 2H2O + 4e- = 4OH-) shown in Figure 1. If instead the bimetallic cell has no oxygen present in the electrolyte the hydrogen evolution reaction (H+ + e- = H followed by H + H = H2 gas) becomes the cathodic process and the anode continues to corrode. This reaction is a much slower reaction (the H+ ion has a very low concentration in solution) than the oxygen absorbing reaction. In acidic solutions (pH 0 – 6) the hydrogen ion concentration is higher and the hydrogen evolution reaction is the predominant one. Corrosion rates become extreme as the pH drops (acid gets stronger).

The Electrical Nature of Corrosion

The size of the cathode relative to the anode is important. A large cathode has more surface area through which electrons can flow and so develops an intense electric current with the anode (corroding metal). A small anode connected to it is forced to supply these electrons and will quickly corrode and fall apart. Whereas a large anode connected to a small cathode can provide electrons from any location and will take a long time to show evidence of corrosion.

Where a less noble (base, anodic) metal has to be in contact with a noble metal make sure the less noble metal has at least one hundred times more surface area than the noble metal. Remember – large anode, small cathode – not the opposite.

During corrosion, ions build up immediately around the anode and cathode saturating their respective regions. The corrosion rate begins to fall due to the concentration of stagnant ions blocking the creation of more ions in the electrolyte. If the ions are removed or more voltage is provided the corrosion rate again picks up. If you want fast corrosion then agitate the electrolyte and add oxygen.

Corrosion produces physical evidence of its presence. The form it takes depends on the mechanism of the corrosion. Some of the more common forms are explained below.

A metal can corrode without being in contact with another metal. In this case different areas of the metal take on different electrical potentials. This can occur because of variations in the metal metallurgical properties or because of variations in the surface oxide layer, such as a break, thinning, inclusion like mill scale, contaminant like dirt, etc.

A crevice is created whenever two objects are brought together. Unless they are perfectly flat a crevice results and oxygen cannot enter the gap but is plentiful outside. Corrosion starts in the crevice because of differential aeration. Figure 3 is a drawing of crevice corrosion occurring under a layer of seawater.

Metal under tensile stresses can corrode at higher rates than normally expected. The stressed areas have changed electrical potentials to the neighbouring metal and are also more likely to develop microscopic surface cracks. Both situations promote increased corrosion rates.

Galvanic corrosion needs to be watched. Dissimilar metals of different potentials joined together by an electrolyte, like process water or rainwater, will cause the more anodic metal to corrode. Running copper water pipe to a galvanised tank will cause the tank to corrode very quickly. Joining copper to steel is nearly as bad. In the galvanic series listed in Table 1 only join metals that are near each other.

Some protection from galvanic corrosion can be achieved if the electrolyte is not present. Without the availability of water molecules the corrosion reaction stops because the electrons cannot find a host to complete the chemical reaction. Where dissimilar metals must be used, for example aluminium fins on the copper coils of a refrigeration chiller condenser, protect them from contact with water. If water must be used in contact with dissimilar metals insure it is deionised and oxygen free.

There exist many species of bacteria living in moist environments that release acidic waste products or that can strip out elemental components of a metal. If these bacteria grow on pipe walls and metal surfaces they will cause corrosion. They occur in both oxygenated (aerobic) and oxygen free (anaerobic) conditions.

Corrosion control involves hindering the natural chemical reactions that occur between the metal and its environment. The common methods used are to:

Removing oxygen from the environment prevents completion of the corrosion process by slowing the chemical reaction requiring electrons. If oxygen can be kept away from the protected cathode then the electrons cannot readily flow, so causing the current to drop and corrosion to slow.

Another technique is to use corrosion inhibitors that combine with the corroding metal (anode) or the protected metal (cathode) to form a barrier layer that reduces the flow of ions and electrons to very low values, which virtually stops the corrosion. If the protective barrier layer is damaged corrosion restarts, so it is necessary to keep an amount of the inhibitor in contact with the metals.

Modify the Properties of the Metal

From the galvanic series we can see that the more noble metals are less likely to corrode. When these metals are combined with those from lower in the series, the resulting alloy takes on corrosion resistant properties. The resistance can come from the development of a protective oxide film on the outside surface or because the new alloy has a different voltage potential which acts to make it behave more noble.

Passivation of a metal is a method of changing the potential difference of a metal’s surface. By removing the oxide layer normally present on a metal and exposing the bare metal directly with an acid, the acid reacts with the metal surface to make a new compound with more noble electrical properties. The passivated layer covers the metal, and provided the layer is not broken and the voltage potential remains favourable, it will protect the metal under it from corrosion.

Put Protective Coating Over the Metal

Metals can be protected by covering them in a coating of a different material with better corrosion resistant properties. Metallic and non-metallic coatings are used.

Metallic coatings of less noble metal over more noble metal provide sacrificial protection. Galvanising is a bonded, protective coat of zinc put over steel. The zinc protects the steel from corrosion in two ways. From the galvanic series it can be seen that zinc will corrode before steel (sacrificial). Secondly, a protective layer of zinc oxide forms on the zinc. If the oxide layer is scratched the zinc is exposed to oxygen and the oxide layer reforms. If part of the zinc coat is lost the rest of the bonded zinc starts to corrode in preference to the steel. As long as the zinc remains in contact with the steel it corrodes sacrificially and protects the steel.

Non-metallic coatings put over a metal can be of two types. They can act as a physical barrier and bar access to the metal surface or they can introduce a very high resistance into the corrosion cell circuit and drastically reduce the flow of electrons. The barrier type coatings protect the metal as long as there are no cracks. If a crack occurs corrosion becomes intense at the metal surface. Resistance type coatings include additives that breakdown in the presence of water and oxygen into inhibiting agents.

Wet corrosion produces a bi-metallic cell and an electrical current of moving electrons flow from the less noble, anodic metal. If instead the electrons were supplied from another source the less noble metal would not corrode first. This technique is known as cathodic protection. By connecting a more anodic metal into the corrosion circuit than the metal to be protected, the more anodic metal will corrode first and provide an alternate source of electrons. This is why zinc blocks are placed on ship hulls to protect any steel in contact with seawater.

Alternatively a metered electrical current from a power source can be connected to the cathode to supply the electrons. Figure 4 shows cathodic protection installed on a below ground pipeline using sacrificial anodes that require regular replacement as they are corroded away.

There are many other materials that can be used instead of metals in situations where metallic corrosion is expected. Provided the physical properties of the non-metal are satisfactory their use may prove a more effective choice.

Practice to Adopt to Reduce Corrosion