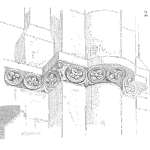 Dr. Nelson created a simple experiment to illustrate the effect of meddling with a stable process. (Dr. Deming did something similar)

While the intent of making small changes to a process may be to make improvements, these perturbations generally increase the variation of the results.

To improve a process requires understanding the source of the variation and often controlled experiments to identify process improvements.

It is too easy to simply alter a process to ‘try something’ or to appear to be working on making improvements. Equipment operators often ‘tweak’ the process with the intent to improve yield or throughput. When these adjustments are made without effective feedback system they generally simply increase the variation and chance of failures.

The Nelson funnel is simple apparatus. It has a moveable funnel suspended over a grid. When a ball is dropped through the funnel it strikes the table and leaves a mark. If we drop 100 balls without moving anything we expect and will see a fairly tight group of strike marks. 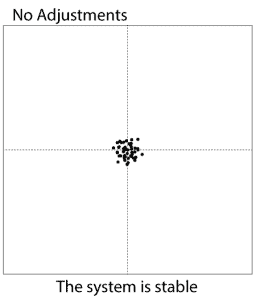 This group of marks shows the common cause variation of the system.

The balls in the experiment have slightly different diameters, coefficients of friction and interactions with the funnel. Likewise, the funnel may not remain perfectly still during the interaction with a ball or between ball drops. We would need to chance the system by moving the funnel closer to the target, exploring better funnel materials and alignment systems, and exploring a way to reduce the variability of the balls.

Instead, if we meddle with the process we generally increase the variation. 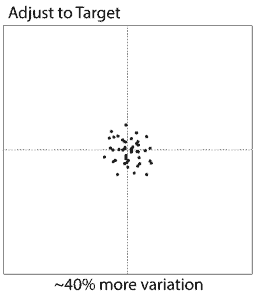 Another cause of this type of variation is managers tampering with worker performance without investing in systemic process changes. Exhorting employees to hit the target more often increases the incidence of meddling with the process.

Another way teams increase the variability of a system is to adjust for ‘windage’. Windage is the compensation for expected direction of variation. It tends to over compensate and broaden the variation. 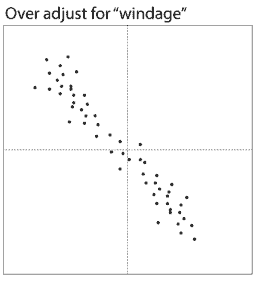 One more example of increase variation is drift. 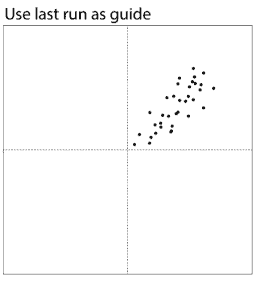 This occurs when one operator trains the next operator, who then trains the next, and so on. Another source is not correcting for wear or accumulation often due to ineffective feedback of the process performance.