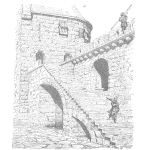 Clean, dry oil can extend equipment life between failure up to 8 – 10 times the normal operating life. Timken, the bearing manufacturer, reports that reducing water levels from 100 ppm (parts per million) to 25 ppm increases bearing life 2 times. British hydraulics research indicates that if solids contamination with particles larger than 5 microns (0.005 mm or 0.0002”) is reduced from the range of 5,000 – 10,000 particles per milliliter of oil to 160 – 320 particles, the machine life is increased 5 times.

It is clear that there is great benefit to be gained in having clean oil and that it may be well worth spending a lot of money to achieve it. This would be the case where expensive equipment was used and the cost of maintenance was high or where the equipment was costly but not highly profitable to operate. Increasing the equipment life and the period between maintenance up to ten times normal would be highly profitable in both cases. On the other hand if the cost of replacement equipment is cheap it is unlikely to be justifiable to spend money on oil filtration.

Solid particle counts in oil can be done with optical equipment (microscope, light extinction), with an electron-scanning microscope (ESM) or by sifting through screens. Each procedure produces slightly different particle counts due to their varying sensitivity in detecting particles of different sizes. The ESM detects many more of the smaller particles than the optical methods.

Counting standard ISO 4406 -1999 is used internationally to rate solids contamination of oils. This standard classifies the cleanliness of oil and provides a basis to define acceptable solids contamination. It also means oil filters can be tested to prove their performance meets acceptable standards. Table No. 1 is part of the ISO 4406 method of coding the level of solid particles in an oil sample. The solid particle content of oil gets a classification that represents the number of particles of a particular size range.

Dirty oil spells rapid death for hydraulic machinery and lubricated equipment. Fine tolerance equipment can have clearances between parts of 5 to 10 microns (0.005 – 0.01 mm, 0.0002” – 0 0.0004”). Solid particles larger than the clearance gap will jam into the space. The solid particles will further be broken-up and mangled while ripping out more material from the surfaces. In equipment with larger tolerances the oil film between parts can get as thin as 3 – 5 micron. Solid particles larger than the oil film will be broken up into smaller pieces and produce more solids contamination.

Figure No. 1 shows a shaft in a journal bearing lubricated by oil. In the drawing the solid particles are larger than the oil film thickness and when they enter the bearing pressure zone at the bottom of the shaft they will tear into the metal, be broken up and make more particles that cause further wear.

Solids suspended in oil are like grinding paste. They scour and gouge surfaces; block oil passages and makes the oil more viscous. The longer the oil is left dirty the faster the rate of failure. Even expensive synthetic oil is of no use if it is contaminated by solid particles. Though synthetic oil has better high temperature and surface tension characteristics than mineral oil all advantages are lost if the synthetic oil is so contaminated that it is destroying the machine. The only solution is to keep the oil clean by filtration.

Oil samples can be taken and analysed in a laboratory. The analysis can measure a large range of parameters and factors that influence oil quality. Typically these include tests that quantify:

It is not necessary to do all tests on all oils in all situations.  The selection of the type of analysis depends on the oil and where it is used. The oil used in combustion engines, gearboxes, hydraulic systems and gas turbines is not the same and the conditions under which it operates are different in each situation. For example soot would be present in internal combustion engines but it would not be present in gearboxes. There is no value in paying money to measure the amount of soot in a gearbox. But the amount of soot in a diesel engine’s oil is of critical importance.

Testing laboratories are required to follow internationally recognised procedures when measuring oil contamination. Equipment used to measure contaminants is also to be calibrated to recognised international standards. However, just as there are clean and dirty maintenance shops, there are clean and dirty laboratories. Results from laboratories without good calibration procedures and sample hygiene practices or from people that don’t fully understand the equipment and procedures should not be trusted.

Not all solid particle counting laboratory equipment can count particles down to very fine sizes. Results from these laboratories would give false figures showing less contamination at low micron sizes than was actually present. Some laboratories use equipment and methods that do not count particles larger than 100 micron (0.004”). Results from these laboratories would show incorrect large particle counts. In future these large particles would be smashed-up and broken down and the resulting smaller particles would quickly contaminate the oil.

If the sample itself is too heavily contaminated then optical counting methods cannot be used because the light emitted by the analyser will not pass through the sample in the same way the equipment was calibrated to receive. Optical counters can mistakenly count water droplets as solid particles. At times it can be necessary to confirm laboratory results by alternate means to prove the results are reliable.

The method and cleanliness by which an oil sample is taken has a critical effect on the accuracy of the laboratory results. If the sample is falsely contaminated by mistakenly taking it from the wrong point or in the wrong way, or if the sample taking equipment or method introduce contaminants, then false contamination levels will be reported.

How Clean Should Oil Be?

Many original equipment manufacturers have accepted the indisputable evidence from numerous field and laboratory trials that oil cleanliness has a major effect on wear within their equipment. Some of them are now specifying how clean must be the oil used in their equipment if warranty claims are to be honoured. For example Caterpillar specify new oil to have a particle count of ISO 16/13. If new oil is above this level of contamination they will not warranty their equipment. When new oil from a leading international oil manufacturer was tested before putting it into new Caterpillar equipment the solid particle contamination was found to be 17/14. This was new oil from a never previously opened container. In this case the new oil had to be further filtered to bring it to below the required specification.

Table No. 2 is a list the recommended target oil contamination levels for close tolerance equipment from a survey of hydraulic oil equipment and oil filter manufacturers.

If you want extremely low wear rates and long equipment life the evidence indicates that oil needs to be filtered down to sub 5 micron size and preferably down to one micron size. Care needs to be taken that the filter does also not remove any solid additives, such as graphite, in the oil. Additives dissolved in the oil will not be removed unless the additive is attached to a solid particle.

Oil filtration can be done under full oil flow or with by-pass flow or offline when the machine is not operating. There are several filter types such as pleated paper and wrapped fibre cord. In all cases the filter must capture a large proportion of greater than 5-micron particles if it is to clean the oil.

The correct way to measure filter performance is by use of the Beta Rating. It is a ratio that measures the number of particles entering a filter to the number leaving the filter. It is an accurate way to measure true in-service performance. Nominal filter micron size ratings from manufacturers are arbitrary and so meaningless. And absolute filter micron size ratings are unreliable since the softer particles in the oil can be squeezed through the filter and reappear as contaminants.

« Wicked Problems
Learning from A Failure »