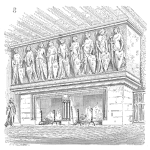 Benchmarking is the systematic process of observation and analysis.

The evaluation of a project, method or process best practices as performed by recognized industry leader may reveal improvement opportunities for your organization.

Benchmarking may focus on diverse business processes and with both internal and external subjects.

The intent is to understand what makes the subject’s process work well.

Understanding a system that operates well may reveal the elements in your process that may benefit with a change.

Keep in mind that not all best practice processes may apply to your specific situation. (Lapide, 2005)

He found benchmarking can create change in an organization including how the organization thinks about processes and the actions taken to create improvements. (Drew, 1997)

Benchmarking, a term originally used by land surveyors to compare elevations, was pioneered in the U.S. Business community by Xerox Corporation in the late 1970’s.

As introduced by Xerox, benchmarking is a process for finding the world-class standards for a product, service, or system and then adjusting one’s own products, services, and systems to exceed those standards3.

These world-class standards can be found by looking at competitors who are recognized leaders for the product, service, or system.

Operating units or functions within a company can also be used as the model; this approach is called internal benchmarking.

Finally, benchmarking can be done using companies that are best practitioners of a particular function, regardless of what industry the exemplary is in.

Benchmarking is a method now commonly used by companies as part of their efforts to improve quality and is a necessary element for winning the Malcolm Baldrige National Quality Award (in 1991, benchmarking was added by the Baldrige organization as an element of the Information and Analysis examination category).

The model used by Xerox for benchmarking is shown in Figure 1. A similar model is described in a book5 by Gregory H. Watson, a vice-president of Xerox.

In normative benchmarking, a consultant collects data from a group of companies on a product, service or process and delivers a set of statistics to the companies with the company names expunged.

The effort described in this report includes elements of normative and functional benchmarking, and the project findings provide a reasonable understanding of the reliability practices use by commercial industry. 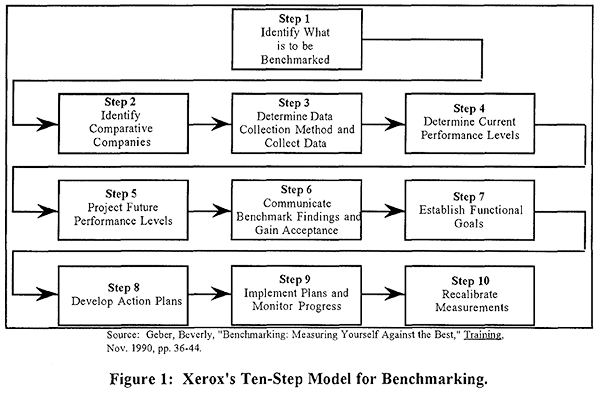 3A more formal definition is a systematic and rigorous examination of your organization’s product, service, or work processes measured against those of organizations recognized as the best, to produce changes and improvements in your enterprise. (Ettorre, Barbara, “Benchmarking: The Next Generation,” Management Review, June 1993, pp 11-16)

4Defnitions of the types of benchmarking are taken from Strategic Benchmarking by Gregory H. Watson, John Wiley & Sons, NY, 1993.

The 2013 paper by van Baren and Curran examines reliability best practices in the aerospace industry.

The paper updates many of the findings in Criscimagna’s work.

The intent is to learn from the practices of others and apply the knowledge to improve your program.

Simply visiting other facilities is not benchmarking, it is industrial tourism.

Learning and applying best practices is the essence of benchmarking.