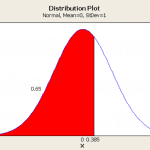 The most common types of engineering data are measurements. There can be a few, thousands, or millions of data points to analyze. Without analytic tools, one can get lost in the data.

A common way to display data is plot the counts in intervals. Here is a plot of 150 measurements where each measurement was rounded to the closest even integer value. Here each interval is a bin centered at an even integer with a width of two units. Each dot represents a measurement so the stack height represents the count. This produced a dotplot, figure 1. 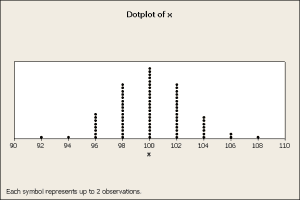 The plot shows where the data is centered and how the data is distributed. The center is about 100 and the data range from 92 to 108. Note that the data has an approximate bell shape, a typical bell curve described by the normal distribution.

If one relied on numerical indices calculated from the raw data, then the average is 100.08 and the standard deviation is 2.75, which is consistent with the graphical results.

A frequency histogram can be constructed to be similar to the dot plot. In this example, bars are used for the counts, figure 2. 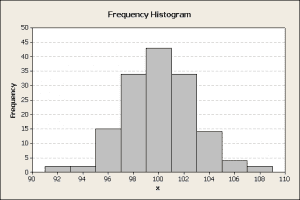 With more data, the height of the bars will trend higher. To compensate for this change, use a percent scale on the y-axis to create a percentile histogram, figure 3. 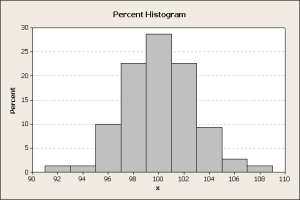 The percent histogram is useful when comparing different size datasets. From this histogram, one could project that 16% of the future data may fall in the 100±0.5 interval. Alternatively, 96% of the data is between 95 and 107. 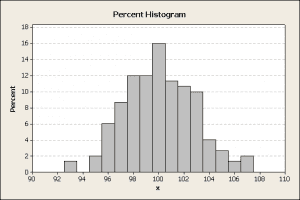 These percentages are dependent on the interval width. Wider intervals will probably contain more of the data and therefore a larger percentage of the data. To standardize for this effect create a density plot by dividing the percentile by the interval width. Now the y-axis the density units are probability/width-units. The concept is similar to describing the loading on a beam in lb/ft, i.e., a density function. In this case, the histogram height scale changes, figure 5. 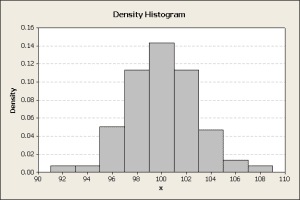 If a lot more data is available, as in big data analytics, a finer resolution of the shape of the density curve is achieved by increasing the number of intervals while simultaneously decreasing their width. This leads to the creation of a smooth curve that can follow a mathematical function, known as a probability distribution.

Distributions have some important characteristics:

From these relationships, limits that contain a fraction, P, of the population can be calculated as in equation 1. If the data is normally distributed, equation 6,

The probabilities can be calculated as the area under the curve, but this is difficult. Instead a standard normal is used, equation 6,

Here the z-value is the number of population standard deviation from the population average. Tables of z-values for the cumulative of the standard normal, equation 5, are readily available in most statistical references, however, there are several common variants. One variant provides the lower tail or cumulative probability for different z-values. Another type provides the upper tail probability. These can be seen graphically in figure 6. 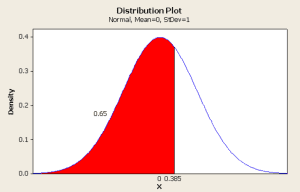 So how can these tables and plots be used?

In future articles, I will expand on this topic to introduce other probability distributions, probability plots, hypothesis tests, and other topics. These methods may be applied to both large and small datasets.

« Prototypes and Learning
What is the Best Reliability Training for Me? »