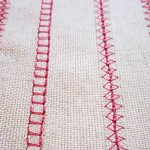 My wife (Beth) and I both train and compete in Brazilian Jiu Jitsu.  It’s a grappling sport like wrestling.  In Jiu Jitsu your Gi (the karate looking uniform) is a big part of the sport.  It’s a very heavy fabric with very specific features that are inspected before each match.  Many moves involve the GI, especially the jacket. I have wrapped my sleeve around someones neck for a choke, You can grab the end of both of the opponents sleeves and dig your feed into their elbows to lock up their arms and throw them, you can use an opponent’s own lapel and wrap it around their neck for a submission or simply to roll them any way you wish. 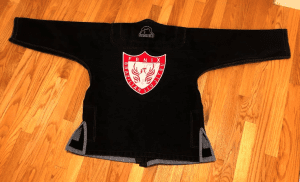 My favorite move is the “Ezekiel.” You put your hands around either side of your opponents neck while facing them.  Place one of your hands in your other sleeve behind their neck. Then pull a hand forward for a fantastic choke.  I ripped a sleeve open in a tournament doing this. I had done it one to many times with that jacket.  It was for first place in a casino tournament and he was just about to tap out. The match was stopped until I found a replacement jacket. I didn’t have a backup and a jacket was thrown to me from the audience from a stranger (another competitor) who just wanted to see how it all would end.

Beth’s favorite is called the “baseball choke.” This is done when the other person is on top of you and believes they have the advantage. Facing your opponent you grab the back of their collar with a hand on each side of the head. You then spin away from them and your hands/arms twist tighter and tighter.  It always reminds me of when you close a vegetable bag with a twist tie.  The more times you spin the tighter it get’s.  My wife won first place at the Boston open last year with this and put the girl out cold.  It got so tight so fast her opponent couldn’t tap before passing out.

Something very exciting is about to happen this Saturday.  Beth is going to fight in the World Master’s in Las Vegas.  It’s a huge international competition.  She’s been training insanely hard for it for a long long time.  I decided not to compete because there was no way I could fit in serious training in an already overloaded schedule, Apex Ridge, deadline with Wiley on new book “Reliability Culture”, and just started a second company ” R is 4 Reliability”, which provides online education for companies and universities.  But I have taken supporting the champ very seriously.  We drill specific moves at night, work through strategies, even do some of my weird diagrams that show flows of moves paired together and the options at each point.  Like a Fault Tree. Apparently I’m the only person that does this.  But what I did last night only took an hour and may have been one of the most important things we could do now for her preparation.

I am the one who does the sewing in our home.  This is probably evident when you see the paint scheme on our sewing machine. I never understood the gender specific association sewing as female.  It’s this fascinating machine that can join material in any manner you like.  It feels exactly like welding. Cut shapes out of sheets, then join together anyway you wish to make 3d shapes out of 2d material. How is that not the coolest thing ever? I used to make my own halloween costumes as a kid, I re-did a majority of the boat interior over the winter, and sewed an awesome knife sheath that also hold a multi-tool on a camping trip last year. I can’t sit still in a hammock or by the fire like everyone else.  I tried relaxing once…it stressed me out. 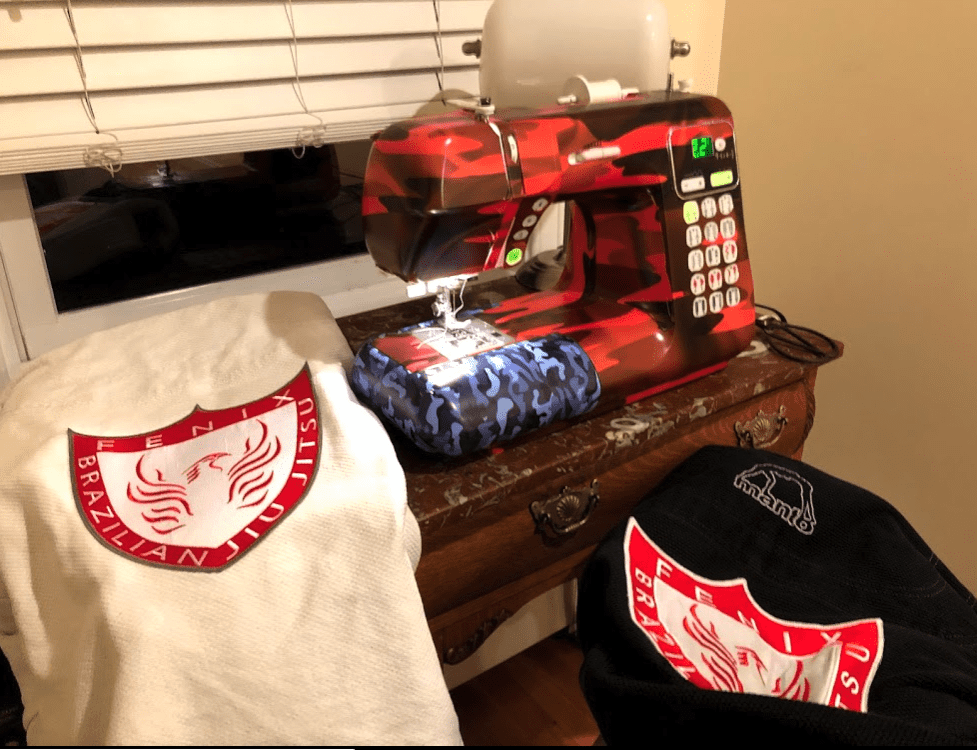 So last night I went through her two Gi’s and looked at all the stitching for defects and needed reinforcement.  She also needed new patches since the old ones were getting frayed.  A competitor will be disqualified as they go out on the mat if there is even a broken stitch on a non-structural part like a patch.  It seems silly but it is very serious.  Fingers or toes getting stuck in ripped or loose fabric is how you get them snapped like toothpicks.  Even when all stitching is intact this can happen.  Three weeks ago I was driving my wife to the emergency room with what we though was a fractured foot.  She was on her back and had her feet up on her opponent.  The opponent quickly attempted to dart to Beth’s side to dive down on her.  Beth’s foot got stuck in a fold of her opponents Gi and ended up dislocating some toes.  They popped back in place nicely so up and running two days later.

My strategy with putting new patches on and going through her Gi stitching was a classic reliability strategy, redundancy.  I have a big box of all types of threads.  The strongest is upholstery thread.  Its’ as strong as fishing line and usually made out of 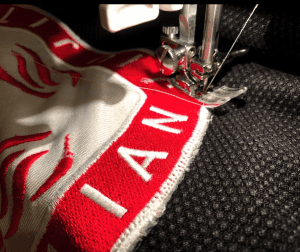 Nylon.  Then there are all the regular blended material thread variations for 90% of sewing applications.  I found it strange that Gi’s don’t use heavy upholstery threads.  This would seem to be the obvious choice. All of the stitching in the Gi’s I have seen use standard blended fabric thread.  The stitching itself is double triple and folded quadruple in some locations.  There are other stitches mid fabric as well to add strength and rip stops.   So what is this strategy about? Why not use the strongest thread available?

When I thought about it I realized it is clearly the best method.  If the jacket and pants used upholstery thread there would be very high stress points in the flexible material. If the stitching doesn’t “give” at all then all the force is translated to a single thread entry point.  That would be the origin of the rip, high force over a small area.  Even with double stitching there would be an increased chance of ripping because the lack of stretch in the first line wouldn’t let the load be distributed well to the partnered stitch line.  By using a regular blend thread that has some stretch with multiple rows it is possible to transfer the load to multiple stitch points in the fabric.  In addition having the multiple row redundancy stops a complete failure in the short term if a stitch pops. Now understanding this strategy I loaded regular blended fabric thread into my machine and double or triple hit all major seems that looked tired and the new patches. The Gi brand’s compete on reliability more than any other feature.  Looks like the top brands took the above strategy, redundancy and increased stress margin by lowering application stress per component.

I believe she can now count on her Gi to be as ready for the fights as she is.  I somehow even worked engineering into my support role.  Let’s wish her good luck on Saturday.