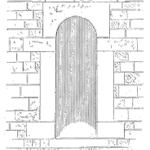 Rotating shafts under bending stress. It is common to transmit motion using rotating shafts. The shafts are mounted in bearings and turned by force through a drive arrangement. The shafts usually also carry a load. These loads cause bending and the shaft reacts by producing counter stresses within itself. Provided the reactive stresses are within the shaft’s strength range it will take the load. But if the stresses are greater than what the shaft can take it will bend. Even if the stresses are below the load limit but fluctuate, it is possible that the shaft will break from fatigue. The point of highest stress can be found by looking at the arrangement of the shaft supports and loads and calculating the forces and stresses.

If you were to hold a half-full pail of water in your right hand with your arm outstretched your muscles would start to ache. It would not be long before you would have to put it down because of the pain. Your arm was under stress.

Definition of Stress and Strain

Strain describes the internal distortion produced by the force. Your muscles contracting against the force of the half-full pail of water were straining to keep the load up. Where there is a force there will also be stress and strain together.

Figure No. 1 shows three common situations of loaded round, rotating shafts. On the left-hand side is a cantilevered load such as the drive pulley on an electric motor. In the center is a uniform load such as on the head and tail pulleys of a conveyor. To the right is a point load such as occurs on the shafts carrying the gears in a gearbox.

The term ‘simply supported’ just means the shaft is held up at the two ends so that both ends are able to move and curve with the effect of the load. If one end could not bow with the load, such as if the shaft was in a journal bearing and not a roller bearing, the term to use would be ‘restrained end- supported’ load. In this case the shaft could not start to bend until it was clear of the restraining journal and the resulting stresses would be in different positions along the shaft.

Each of the shafts can be analysed and the stresses calculated. The highest stress is then checked against the allowable yield stress before it bends (See article 233 ‘Stress in Metals) and the fatigue limits of the shaft material (See article 283 ‘Metal Fatigue Failure’). The analysis determines if the shaft will meet its duty, or if a different size shaft or a different material with greater stress carrying ability, is needed from that originally proposed.

Look for the Point of Greatest Stress

For single diameter shafts the location of the highest bending moment is also the point of highest stress. If the shaft is stepped with different diameters it is necessary to calculate the maximum stress along each diameter. The stress in a particular spot on a shaft depends on the shaft’s ability to carry the moment. For a round shaft that ability depends on the area available to take the load and the strength of the shaft material.

The ability to resist breakage depends on the shape and size of the shaft (Second Moment of Area) and the ability of the material to resist tearing apart (Young’s Modulus). If the shaft thickness is too little, or the shaft material is too weak, the shaft will bend or snap. Knowing the location of the maximum stress allows one to locate the point of likely failure in overload situations and to prevent them arising.

Figure No. 2 also shows the deflected shape the shafts would take under the imposed loads. These deflections would normally be from a few 1/10ths mm to a few millimeters depending on the size and position of the loads, location of supports and the properties of the shaft. Below is real-life tale of what happens when a shaft is forced to bend beyond its stress limits.

The screw conveyor (auger) shaft was broken in half right at the center. It was a 3200 mm long, 50 mm (2”) diameter, Schedule 40, 316 stainless steel pipe with the 1:1 pitch screw flights stitch-welded to it. The break was dead in the middle between the two end-supporting roller bearings.

An identical break had happened only 2 months previously. What was causing the brand new shaft to break?

A close examination of the screw conveyor trough told the story. Product had built up 10 – 15 mm thick on the bottom of the trough. It was caked on and would only come off when hit with the blade end of a pinch bar. When the screw had been in place in the trough, it was forced to ride over the thick crust, while the two ends were held tight in the bearings. The crust produced a deflection in the shaft. The biggest deflection was at the center of the screw where it caused the greatest bending stress.

As the screw turned during operation, the highest cycling stress was in the middle at the point of maximum deflection. The stress in the bar changed from tension to compression during each turn of the shaft. Exactly like you bending a paper clip up and down until it breaks. The shaft failed for the same reason – metal fatigue due to cycling stresses caused by the crust build-up bending the shaft.

If you have screw conveyors in use on crust-building product, make sure the crust on the bottom of the trough is regularly cleaned out. Otherwise be ready to change out the shaft. If you are experiencing any shaft breakage at the mid- point between end supports, check to see if the shaft is experiencing excessive deflection under cyclic or fluctuating loads.

« Millennials and Management: It Is Your Fault They Don’t Stay at Your Company
What Happened to General Electric? »