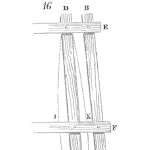 In the situation where you have a sample and would like to know if the population represented by the sample has a mean different than some specification, then this is the test for you. Oh, you also know, which is actually rather rare in practice, the actual variance of the population you drew the sample.

This test is often the first in the textbook that describes hypothesis testing. It is straight forward and provides a good foundation to apply other hypotheses tests with different circumstances.

A good practice when applying any statistical application is to consider the related assumptions. For this test there are two assumptions involved:

The sample is randomly selected from the population under investigation
The population distribution is a normal distribution. Note as the sample size goes up this becomes less on a concern due to the central limit theorem.
If either assumption is not true the results of the z-test statistic may not be informative.

The null hypothesis for the z-test is

Next specify the alternative hypothesis. There are three choices depending if you want to check if the mean has changed from an expected value either higher or lower (two-sided). Or, if the test is to detect a shift higher or lower (one-sided)

The alternative hypothesis for a z-test may be

The last step for the setup is to determine the rejection region. This is the value of z that indicates the alternative hypothesis has sufficient evidence to suggest the population mean value has indeed changed.

To do this we need to specify the value $-\alpha -$ which corresponds to the risk we are willing to take that the sample indicates a shift of the mean when in fact is has not changed. We call this a Type 1 error. If we are willing to accept the risk of 1 in 40 times a random sample will result in a sample mean falling in the rejection region, we would establish $-\alpha=\dfrac{1}{40}=0.025 -$, for example.

For a two-tailed test we divided the probability of a type 1 error by two as the rejection region is divided equally between the two tails of the distribution.

Let’s say we have a long standing process creating the top tube for a bicycle and we want to know if a change in the process has indeed lowered the mean weight. We know the standard deviation has not changed based on prior work and is 0.0057. We start by setting up the hypothesis test.

The alternative hypothesis is the new process results in a lower mean value.

The test statistic is calculated based on the data collected in a sample of readings. The data is in the following table.

Given the desire for a confidence value of 95% or an $-\alpha=0.025-$ we can determine the critical value from the rejection region corresponding to the probability of a type 1 error under the lower tail of a normal distribution. In this case, $-r_{0.05}=-1.96-$ keeping in mind the normal curve is symmetrical and we are interesting in the lower tail region.

Thus, since the sample mean results in a z value of -5.49 which is well below the critical z value of -1.96, we can conclude the test provides evidence that the top tube process change results in a lower weight with a 95% confidence.

« Reliability Questions and Decisions
What is Inherent Reliability? »