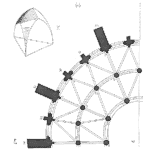 This article covers the operation of steam traps and how they work. Steam is a greatly used medium. Its use ranges from heating process and domestic fluids through to driving turbines by the expansion of the vapour. Yet the steam trap at the bottom of a drop leg is easily forgotten.

During distribution throughout a plant, steam vapour cools down on pipe walls to become hot, distilled water (condensate). It pools in the bottom of piping and if not removed it builds-up, filling pipelines and stopping steam flow and heat transfer. Condensate must be drained away from steam lines. Installing collection pockets with drop- pipes throughout the distribution system does this. At the bottom of the drop-pipe is fitted a steam trap. The trap discharges hot condensate until steam arrives, at which point it shuts and awaits accumulation of more condensate.

The simplest (but least effective) steam trap is an orifice plate. This is a small hole, about 1 – 1.5-mm diameter in 3- mm thick sheet metal put between flanges. Figure No. 1 shows the orifice plate in use as a steam trap. The orifice plate forces the condensate to pool. It must then flow through the small orifice before discharging into near- atmospheric pressure in the condensate recovery piping.

The orifice plate works in two ways. When the condensate load is heavy it collects and backs-up. The hot water cools and the steam pressure slowly forces the condensate out. If the water collected has cooled to below 100o C it drains out as a stream of water. If instead the condensate load reduces, there is less time to back-up and cool. In this case hot, high- pressure condensate enters the hole at more than 100o C and flows into a pipe that is at near atmospheric pressure. Water at atmospheric pressure boils at 100o C. The very hot water flashes-off into steam, which expands to take-up more space and chokes the flow through the hole. The condensate collects and repeats the cycle.

A steam trap serves the same purpose as the orifice plate but regulates the flow by stopping the steam with the use of a valve. They function as an automatic valve that is closed to steam but opens when condensate is present. A secondary important benefit of some designs is their ability to also vent-off air and gases trapped in the steam piping. Steam traps use one of three principles to operate.

Choice of a steam trap depends on –

A steam trap installation requires a strainer up-stream as well as a way to prove the trap’s operation.

Is The Stream Trap Working?

It is vitally important that every steam trap in the piping system is operating properly. Steam traps need to be checked at least every six months and their operation proven. Traps can stop working because of –

Fortunately all properly working traps will force condensate to collect upstream and then discharge it. This means we need only detect the build-back of condensate and its removal to confirm the trap’s operation.

To observe a trap’s operation a sight glass fitted one (1) meter downstream is ideal. Look for the ebb and flow of condensate passing the glass port. An alternative to using a sight glass is to install a bleed point down stream of the trap that can be opened to observe the flow characteristics. On float traps under heavy condensate loads it maybe necessary to cutback the flow by partly closing an up-steam valve to give it time to operate. Open the valve up after the test.

« Rethinking Risk and Uncertainty
How to Set Up a DOE »