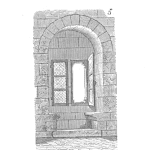 The exponential distribution is a model for items with a constant failure rate (which very rarely occurs).

If the chance of failure is the same each hour (or cycle, etc.), including the first hour, 100th hour, and 1 millionth hour or use, then the exponential distribution is suitable.

The exponential distribution is a reasonable model for the mean time between failures, such as failure arrivals, whereas the Poisson distribution is used to model the number of occurrences in an interval.

Keep in mind that

The CDF is the integral of the PDF and expressed as

And represents the probability of failure over x which is commonly a duration. Of course, x ≥ 0.

The reliability or probably of success over a duration, x, is

Which is a constant.

The exponential distribution has a few interesting properties, primarily that it is memoryless. In other words, the probability of failure in the next instant or hour does not depend on how old the item is nor how long it has been in service.
Another aspect to consider is it is possible to add failure rates. This makes parts count predictions possible using limited tools for calculations. It used to be very easy to add and much more difficult to multiply or apply exponents, thus the desire to assume a constant failure rate.

« Reliability Questions for the Drone Industry
The Poisson Distribution »