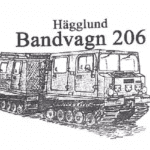 In February I did a hit and run trip to Fairbanks Alaska with my daughter, age 11, to try and see the Northern Lights.  It was a long shot but I’ve done nuttier expeditions and she was game.  It was actually her idea, and she knew who the right person was to ask for such a trip.  She turned 11 in January.  I asked her what she wanted for her birthday.  I was ready for the “this or that electronic” request.  Instead she said “I want to see the Northern Lights.”  First thought was “Geez that’s a bit extravagant”  but 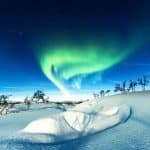 then my second thought was she’s 11 and this could have a great impact on her and what an interesting/cool thing to ask for.  It might energize an interest in physics or natural photography, or cold weather clothing design. I also thought about how in a few years she may not want to do anything with me because I’ll be an “idiot who doesn’t get it.”

So I booked a quick two day trip to Fairbanks Alaska.  She was prepared if we didn’t see them but we, of course, were really excited about the fact it could happen. I looked up the solar flare report on the NASA site and it looked good.  The Northern Lights are solar wind (star plasma) from our sun hitting the Earth’s atmosphere. It takes about four weeks for the solar wind to travel to Earth.  When it hits the gases in our atmosphere they light up like a neon light bulb. Pure darkness is a key to seeing them clearly. Weather was a risk and unfortunately it was a full moon.  This means that even being far away from light sources the sky was going to pick up any bit of light glow from weather.

So with all these factors I decided to maximize our chances by going high altitude on top of a mountain to get through as much of the weather as possible.  I found a place that will run you up a mountain in some kind of snow cat to where no pedestrian should go.  They have a heated tent up there with promised hot cocoa so how bad could it be?  It was -25F at the bottom of the mountain.  That is the kind of cold that freezes the inside of your nostrils when you inhale.  It feels like your nose suddenly has a hard inner core like a metal pipe liner.   I don’t know what the temperature was at the top of the mountain but it seemed much colder. So cold you don’t feel “cold.”  Your body just give indicators of “I think something is wrong” and all the warning lights go off on the dashboard.  The best way I can describe it is that it felt like you were getting wet when you stepped out into the air. The cold moves through your clothes like water if you jumped in the ocean.

The vehicle we took up was an interesting “thing.”  It was some artic cold war era military troop transport used for battles in 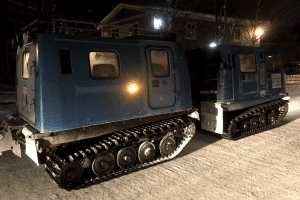 the tundra.   I FREAKIN LOVED IT!!!!  I looked it up after and found out is was a Bandvagn 206. Originally developed for the Swedish army in 1974 and used by about every country who wanted to be mobile in snow since.  It is actually amphibious as well. It was so loud on the inside that you had to wear earplugs.  The trailing car section thingy was also track driven by a drive shaft that went through the linkage. The low gears in this thing moved it at about an inch an hour but there was absolutely nothing it couldn’t climb.  I bet it could have pulled a building up the mountain.

The journey took a good while to the top. We went a long distance on mountain terrain that was in no way a planned path for anything other than, well, a cold war era military snowcat.  A bulldozer would have gotten stuck. So as we go further and further my mind is transitioning from wow this is cool to “ahh what happens if this thing breaks down?  Who rescues you?”  So I started looking at it a bit closer.  I would say that reliability and ease of maintenance were definitely non-negotiable factors in the product development process.  Each switch on the dash or device in the cabin looked like you could take it apart and fix it if needed.  You don’t even need to do that because you could just lean down and connect the wires by hand. All the controls were simple and made of thick steel or aluminum.

As many of you know I tend to get pretty intense about keeping the product balance factors all alive in product development.  I am mostly, of course, focused on the fact the Reliability get’s left behind because it has the longest return on investment.  But can you imagine the reliability engineer in these design reviews?  I picture him or her just standing on top of the table for the entire thing with an authoritative scowl striking down any suggestion to minimize tests or redirect budget away from measuring or improving reliability.

The transmission and motor were inside the cabin (why you needed ear plugs).  They were easily accessible and well protected 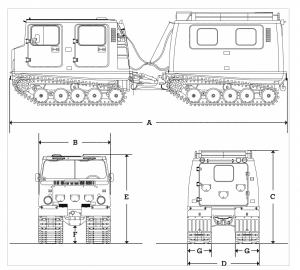 from exterior bump scrapes and maybe explosions.  It looked like you could do major engine work comfortably and quickly from the inside.  Safe from finger losing cold temps and polar bears. Both very real risks.  Side note, I hope to one day do a DFMEA where “Mauled by Polar Bear” is listed as a failure mode effect.  The body was a very thick fiberglass shell.  Won’t corrode and easy to fix.  I imagine this was very helpful for expeditions that utilized it’s amphibious nature in highly corrosive salt water.  Not to mention lightweight so it floats.  It also states that the track contact patch size to weight ratio makes it light enough to float on top of light packed snow instead of sink.  So basically there is no snow deep enough to stop it because it’s gliding on top.

When we got out we realized we weren’t prepared for that level of cold. We walked over to the tent that had a propane camping stove for hot chocolate and tea and two propane room heaters.  I can best describe their effectiveness as getting the tent to a temperature where the cold hurt a little less.

So every so often I would pop my head out of the tent and look for the lights.  Then it happened, a green flutter,  then more, then much more.  It was really cool.  It looked like a wavy moving scarf that kept on growing and growing and then flying away.  Another would follow.  When it hit the oxygen levels of the atmosphere it would turn red.  These are the two pictures I took of it with my phone. 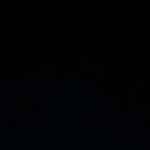 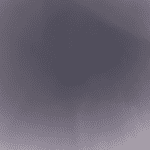 Yeah electronics don’t work in those kinds of temperatures and I was an idiot for even pulling my fingers out of my gloves for those few seconds.  There were people who took pictures but they brought gear that looked like it should have a NASA logo on it.  We were up there from 10:30 p.m. to 3:30 a.m.  There was no way down until they decided to head back.  I was hoping that when they turned the key it started right up, and it did on the first crank.

So without a doubt the Design for Reliability (DfR)  and Design for Maintenance (DfM) had some serious authority in the design process.  But I wonder if it was a process that also became unbalanced to their favor the way project schedule or cost point do in commercial product development programs.  If they had used a process like Bounding or Focus Rotation would have there been more internal cabin sound reduction and a reduction in driver fatigue issues.

I do wonder what the plan is when the Bandvagen does break down.  Even sending another would be hard because you would have to trail blaze a bit and moving people from one to the other could result in losing a few in deep snow.  I guess I’ll keep my eyes on new articles from the ‘Arctic Circle Gazette” and see of their are any reports.

I looked what militaries are still running these awesome vehicles.  Here’s the list.

Then I then looked up some of the civilian outfits that have them.  Take a look at the one I circled.  I think I’m going to have to make some calls and see if I can drive this thing.  I may be making a large donation to the State Troopers Benevolent Society later this 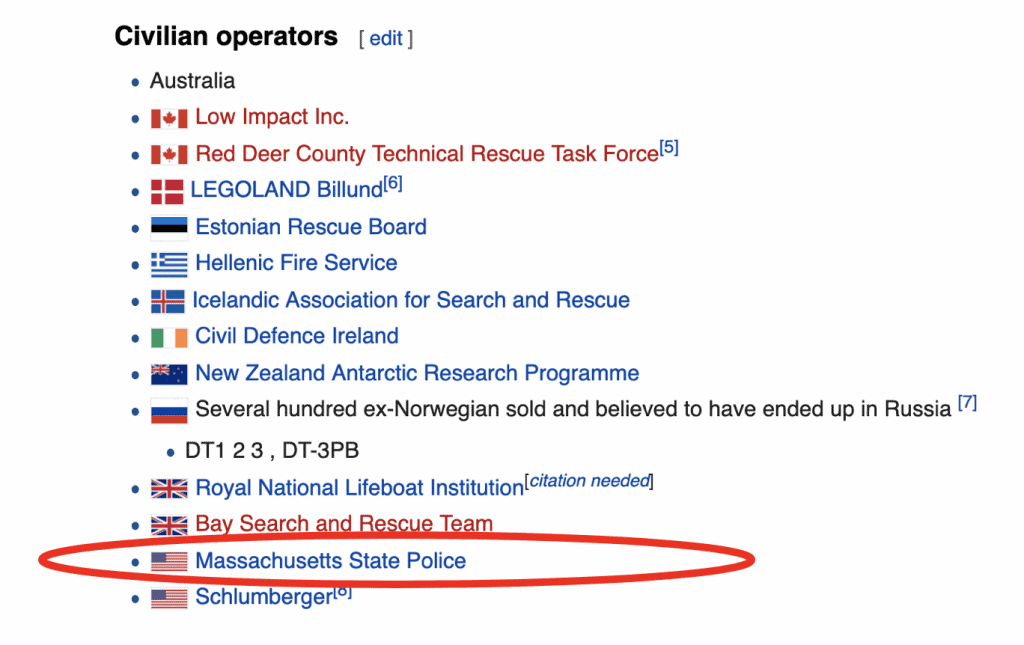